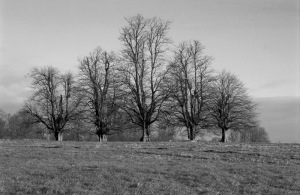 Trees make the landscape, they add scale and make hidden walks, without them it would almost seem to be barren. Trees take hundreds of years to grow to old age which is when they become very interesting, both from an aesthetic point of view and from a wildlife perspective. Trees come and go as the fashion dictates, as in the Bridgeman formal west avenue that was planted in the 1720s and then when 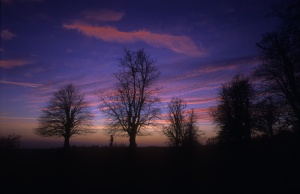 Capability Brown came in the 1760s with a more naturalistic approach, he had Bridgeman’s formal west avenue broken up so that the trees were seen as clumps rather than an avenue.
These can be seen to the west of the hall and south of the new young lime west avenue. The photograph above shows you one such clump, see if you can find it the next time you are in the parkland.

This same avenue looks totally different as the light alters, ever-changing the experience of walking though the park.   Above was a lovely evening after the sun had set in the west and fiery red skies enhanced the silhouetted trees. On the right, a setting sun over Arrington provided an excellent back drop to this  same Lime avenue. Ever wondered why so many Lime avenues were planted? Try walking along one of the avenues on a still summer’s evening when the Lime flowers are out. The trees hummmm with so many bees and the scent of the blooming Lime flowers is beautiful. Or look across at the extraordinary vivid green of the trees in springtime when they are just coming into leaf. 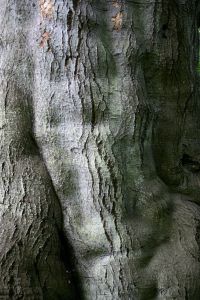 Silver grey and thin is the Beech bark, sometimes you can make out a face if you look hard enough. There are not so many Beech trees at Wimpole now as many have been lost through old age and storms, however there are some pretty big ones in the park and near Arrington, where the American WWII Air Force hospital was, you can still find the past etched into the living bark. One such etching scribed into the bark is of an aeroplane, see if you can find it on your next walk. Beech trees produce a mast year every so often and the ground can be littered with their nuts; an edible  vegetable oil can be made from these. The timber is not durable so you can not use it outside but it is excellent inside and has many uses: rolling pins, brush heads, ice cream sticks, furniture … the list goes on. 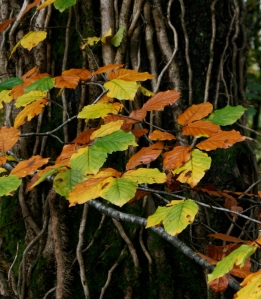 Now another thing you can do with Beech is to collect the young leaves in spring, you’ll need quite a few to make this liqueur. It is the same recipe as for sloe gin but instead of sloes you use beech leaves; pack them in a glass jar, then add some sugar, another layer of leaves and so on. When half way up the jar add the gin and then some more leaves and sugar. In the first month you will get a bright green liquid but this goes off-green with age. Three to six months later and you can taste the result. I thought it tasted like hot cross buns. Do make sure they are very young leaves though. 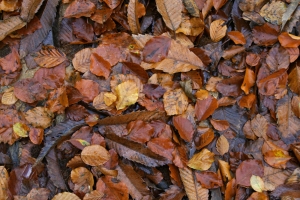 Autumn is another time when the Beech casts its spell. The ground is covered with leaves all shades of brown and yellow. It is in this leaf mould that you may find the Wood blewit mushroom, one of my favourites as its good to eat and has the most beautiful purple colour. In the photograph opposite there is an intruder you will not find at Wimpole, the photo was taken elsewhere, can you spot what it is? A clue is that this tree does not like alkaline soils.