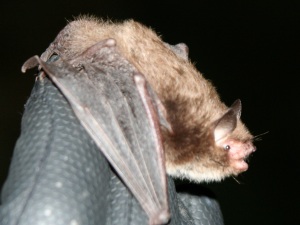 On the Wimpole Estate there are definately eight species: both the 45 & 55 pipestrelles, the long eared bat, noctule bat, serotine bat, natters bat, daubentons bat and the rare barbastelle bat. There have been further tentive records of both wiskered bat and leislers bat.

The most important species of bat on the estate is the barbastelle and is the reason why the woodlands have been designated both a Special Site of Scientific Interest and a european Special Area of Conservation. This species mainly feeds on micro moths and will travel tens of kilometers to find rich hunting grounds, in fact it is known that they will travel to Cambridge twice in a night and get there faster then you can drive from Wimpole to Cambridge.

The other very important bat is the serotine, this has been affected in much of eastern and south eastern england through loss of habitat and loss of traditional farming which includes animal husbandry (they like night flying dung beetles fron dinner ugh!)