Posted on September 14, 2018 by djobaldrickowen

Our Leader’s meteorological prediction came to pass and on Saturday was glorious Mcweather. Richard Brown, aided by the Wimpole “Tuesday night is mowing night” regulars ran a one day scythe course for 10 people. Starting with the basics of assembling a scythe to fit their body and proceeding through mowing technique and finally to the dark arts of honing sand peening. It was a great success and many of the beginners were confident enough to take part in the mowing competitions on the Sunday and resulted in the McScythe stall doing a roaring trade..

There was a constant trickle of members of the public who came to watch some scything and to see what the greenwood workers were up to – quite a lot of us as it turned out, since in addition to a pretty full turn out from the Wympole group and Magnus our occasional weapon smith, Sue Holden, Will Wall (spoon carving) and Simon Lamb (gypsy flowers and treen) from the Suffolk group made guest appearances as did Alan Reeder – the APTGW (Bodgers)  insurance man and even he known as El Presidente das Bodgeros (Jon Warwicker or was it possibly Fred Wedlock of “the oldest swinger in town” fame?) 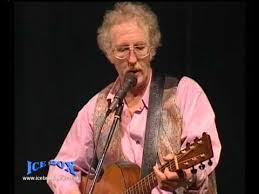 There was plenty of straight coppiced ash felled before the ash dieback had spread too far in them, that was excellent for splitting to generate rough blanks for a wide variety of furniture making projects by Valerie, Matt, Andrew and yours truly and, in Alastair’s case, break levers. The latter are for helping to apply and release the brakes on wagons and will be on the used on the Nene Valley preservation railway. Kate meanwhile continued on with her oak shingle marathon. Simon had also procured a couple of oak planks and had recently removed some more elm suckers from the hedges at the bottom of ‘the Sixes’ where we had the annual meeting of the Wympole strippers back in May (see and earlier blog). The elm was primarily for stripping the bark from for seating and this is usually best done when the sap is up and the wood still very wet in April and May, so this was a bit late. However, it worked well and we collected further supplies for the coming year.

Inspired by John Alexander’s seminal greenwood book from the 1970’s ‘Make a chair from a tree’ or ‘MACFAT’ which explains how to make a shaker-style, two back-slat chair from American red oak and hickory bark, our great and glorious leader had decided that this should be done properly and a chair made from truly only one type of tree – elm. Elm was often used for Windsor chair seats and wheel hubs because its grain is ‘twisty’ and so the wood is resistant to splitting, unfortunately this is something that needs to be done to it if you are going to make a post and rung chair from it! However, not being one to turn down a challenge last year Jim ‘mad-as-a-sack-full-of-badgers’ McVittie made a very wonderful English-style ladderback chair from a (single species of) tree, as you can see. However, a challenge can always be stretched a bit further and so this time we decided to try and build a chair from a single elm tree, namely the largest diameter one we had: this despite Jon Warwicker’s suggestion, that the wood was only fit for burning! Cutting it to length, allowed several of us to try out Will Wall’s superbly reconditioned two-man saw and to hear him shouting “look at those noodles” over and over. The splitting out was a painfully hard process and involved many people and even more wedges, but in the end we got there. As elm warps and twists as it dries, we decided to leave it to do its worst before trying to build something out of it in the winter (maybe by next scything festival is more likely ed.)

That just left the oak planks, with which Graeme decided to make a star gazer chair with only hand tools – again brave and ambitious and ultimately successful. By the end of the day, Sue and Will had made some very lovely spoons and Simon Lamb some exquisite gypsy flowers. Timber, however, was not the only raw material in use as we had both wool and willow work going on. Kathy used some Wimpole estate sheep’s wool and a peg loom to create some additional comfort for the stargazer chair.  Although the raw wool was still full of bits of the estate, once the resulting pads were washed in a pillowcase at home, they came out beautifully. Val meanwhile created a couple of wonderful tool baskets (one on each day) using various different types of willow (Dicky Meadows, Flanders Red and Buff) with a Catalan base rather than the traditional ones and some steam-bent wooden handles made from, you’ve probably guessed by now, Wimpole estate ash. 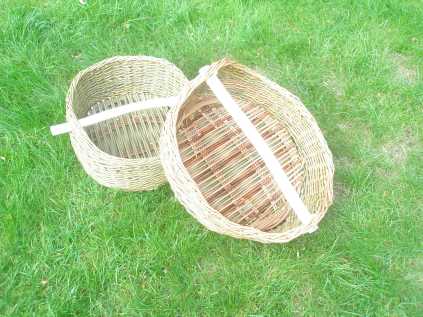 …and so to the evening after a hard day scything and wood working when the public had gone home, dinner was cooked. So that beer could be drunk and a fun and safe evening had by all, all tools and scythes were stowed away to leave only a pond and a few tall wooden poles stuck in the ground for making hay stacks, and you can’t get into any trouble with those can you Champ?…

This entry was posted in Uncategorized. Bookmark the permalink.