Posted on August 21, 2018 by djobaldrickowen

…Apologies for the time it takes to get these on the blog – sorry (ed.).

May is the optimal time of the year for obtaining elm bast. The bast is the ~1/4” layer consisting of mainly the phloem just under the rough outer bark, which carries sugars from the leaves to the rest of the tree. When this layer is removed from the tree it is somewhat flexible, and so can be woven, rather like leather, to produce various products including chair seats, baskets and bags.

In order to collect it the outer bark has to be draw knifed from a felled elm tree leaving behind the cream coloured bast layer visible. This rapidly, over the space of a few minutes, oxidises to a golden brown with a visible grain-like pattern. The bast is then scored along the length of the tree with a sharp knife, trying to work round any knots and flaws, and then peels away in long strips. These can be woven wet but it is better to dry them out thoroughly so they can be stored almost indefinitely. When needed the strips can be soaked in water overnight and then woven.

The use of bark for weaving has been practised in Europe for thousands of years, although it was usually birch or lime bast that was used. In fact Otzi, the copper age mummified ‘ice man’ carried a bark bag. The use of elm bark for seating greenwood chairs and stools has come down from American settlers via the shakers, the arts and crafts movement and the American greenwood workers of the 1970s lead by John/Jennie Alexander with whom many in leading greenwood workers in the UK, like Mike Abbott, worked with. The American settlers though, used bast (from hickory in their case) for weaving in turn as a result of watching the native Americans.(Ed. Sadly died John/Jennie Alexander earlier this month 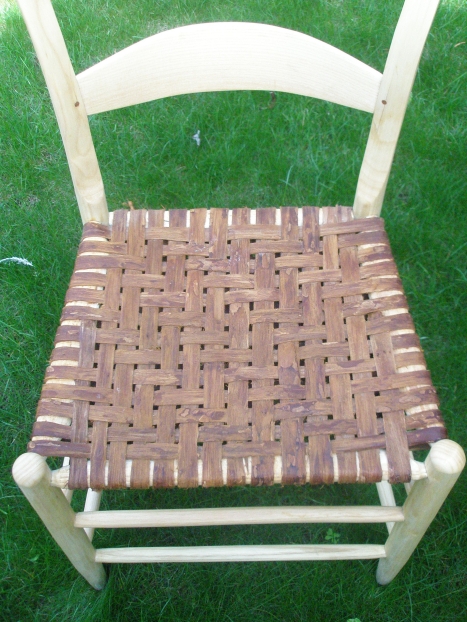 Although there are a few big elms left on the Wimpole Estate following Dutch elm disease, there are many many suckers but these tend to die when they get to around 25’ high and often have to be felled for safety reasons. These provide an excellent source of good 2-3m lengths of bast for seating and round-wood timber of an ideal size for making elm frames for all manner of projects. Sometimes as part of agreed thinning projects we have been able to source elm hidden from the eyes of the public from within the woods but this year we had to come out into the open in the full glare of the sun and the public taking elm from beside hedgerows near the old common ‘sixes’ where they were encroaching on the grassy field margins. So about a dozen of us variously appeared on a hot Saturday in May to take down and process bark from half a dozen hedgerow elms – under the careful supervision of our senior managment, who held court in the buggy whilst we all slaved away. 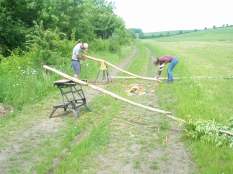 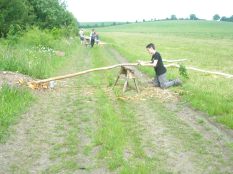 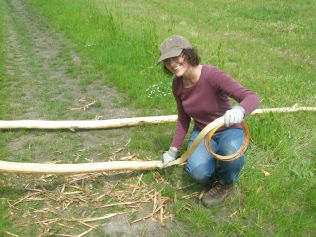 In the end we all got a good supply of bast for the coming year, so all we need to do now is make frames to use it on. The first bit of which has already been put to use in seating a footstool-making course that Jim, Andrew, Jon and I ran at Orchard Barn near Stowmarket shortly afterwards.

Some of this year’s harvest drying

This entry was posted in Uncategorized. Bookmark the permalink.