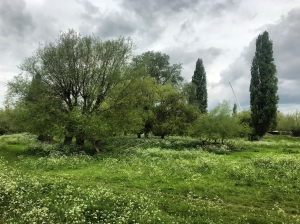 Well it seems that Cambridge City Council are to be commended on their environmental work within the city, namely on Fen Causeway as you come in west from the A603.

Over last winter the contractors have been busy changing the shape and profile of the little overflow stream off the River Cam. They have put in a gravel bed with rocks to constrict the flow which will provide riffles that keep the gravel clear of silt. This will allow fish to lay eggs in the gravel and will also keep them well oxygenated. They have also squeezed the stream with faggots which will also slightly increase the water flow while allowing water plants to grow and hopefully stabilise the banks as cattle are allowed to graze this common, a rare sight in most cities these days.

A haven for wildlife

Usually people hate muddy pools but a few have been left which is good as many invertebrate species only like swampy, wet ground. I was very impressed with the work as I walked into the city and, to top it all, there was even a little egret enjoying the new surroundings. Just shows you what can be achieved if there is a will. Well done the CCC.

On another environmental note the Radford family have been farming the Burwash Manor Farm for many generations and a few decades ago Mike Radford decided to buck the trend and go organic to help the wildlife.

After adjusting to changing the farm from conventional farming to organic methods he decided to turn a wet piece of land into a dragonfly sanctuary. With help from a Cambridge University boffin a number of ponds were created and today they support around twelve species and the cattle graze the grassland and some of the pond edges.

Interestingly cattle and sheep are used to graze the leys – these are fields set aside for clover and other legumes so that nitrogen can be fixed into the soil. The clover and other legumes take nitrogen from the air and convert it into organic nitrogen in the roots of the plant. This is, in turn, fixed into the soil for the bacteria to use and then turn into other nitrogen compounds that other plants like wheat and barley can use later.

Livestock are an important part of an arable organic farm as firstly, they mow the clover, other legumes and grasses by eating it, then secondly, the dung that comes out the other end adds organic matter and nutrients to the soil, then  thirdly, a lot of dung invertebrates breed in the dung and the larvae break down some of the more complex organic chemicals. With all these insects recycling, many get eaten by birds and bats. For instance many farmland birds when breeding need to feed their chicks vast amounts of highly nutritious insects in order for them to grow strong and survive. Skylarks are a very good example and seem to like nesting in fields where there’s livestock a low levels.

On less productive land like the very chalky soils on the steeper slopes have been set aside for permanent chalk grassland, this provides another important refuge for insects, mammals and birds but it also provides extra hay or grazing for the organic livestock.

Unfortunately being organic means the arable weeds do cause a problem in some years, most notable charlock which looks like rape, poppies and wild oats. The wild oats are rouged, that is a gang of people are employed to walk the arable fields to pull out and remove any of these plants. Charlock and poppies have been a real problem for the organic farmer but not now, Matt Radford has brought a special cutting machine that can go through the wheat crop mowing down most of the charlock. The job has to be done just at the right time though or you could cut the wheat stems once they start to thicken. 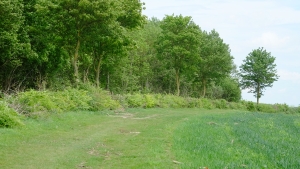 Also Burwash manor farm had no woodland until Mike Radford planted some spinneys, he also planted miles of new hedges too. The woodland is coppiced regular and the hedges are laid on a rotation. Its worth pointing out that this organic farm turns a good profit yet provides ample areas for the wildlife and places for the local population to walk, a shining example of excellent land management.