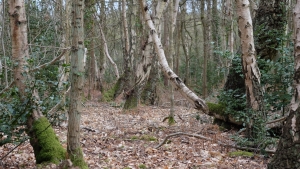 Silver birch… well we don’t have very many on the Wimpole Estate, they do however grow in abundance in the nearby ancient Eversden Wood taking advantage of any coupe felling as they are a pioneer species. Fast growing, demanding a lot of light and having literally zillions of light weight seeds that drift from the parent tree far and wide. However I went to Norfolk to help Andy Marczewski thin a few of his trees in the woodland he owns. Most were silver birch and would predominantly go for firewood but some were big enough to plank and we also chose the ones with pippy burs on them. Below is a small gallery of photos from his wood which is acidic and so has a different flora to Wimpole which has calcareous soils. 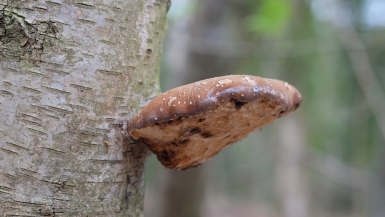 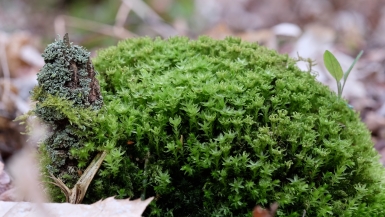 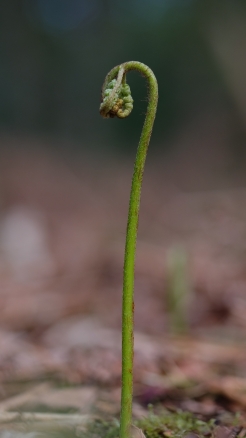 I left Norfolk with a car loaded to the hilt with silver birch for the Wympole bodgers. I wonder what they will make out of the wood, which is incidentally not suitable for outside use as it rots away quite quickly, so I guess they’ll be making treen and the like.

The Bedford MJ fire engine had an outing to Framlingham

In April the Wympole bodgers had an invitation from the Framlingham Country Show to demonstrate some rural skills. It seemed a good opportunity to see somewhere different and, what a difference, the show ground overlooked the spectacular Framingham Castle. 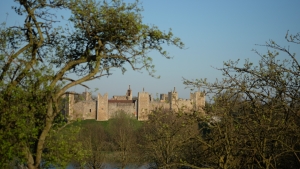 Framlingham Castle was built by the Bigods, a powerful Norman family in the 12th century. The first stone buildings at the site were probably the work of Hugh Bigod, 1st Earl of Norfolk (d. 1177). But it was under his successor, Roger Bigod II (d. 1221), that the huge stone curtain walls we see today were built.

In 1213 Roger Bigod II entertained King John at the castle. But by 1215 relations had soured – Roger, along with 25 other barons, challenged the high military taxes levied by King John and forced him to accept the Magna Carta. Enraged, John laid siege to Framlingham in 1216. After two days, the castle surrendered. This loss of the castle was only temporary however – it was later restored to the Bigods.

Well, just overlooking the castle was sufficient enough to make a lovely weekend but the show just happened to coincide with a few days of glorious weather. I had brought along a star tent in case of rain but in fact it became more useful for shade. Well you don’t normally get this sort of weather in April!

Many items were made with the birch ranging from spoons and turned bowls to hand carved bowls, the best of which were made by John Warricker. A little gallery can be seen below of the bodgers at work. 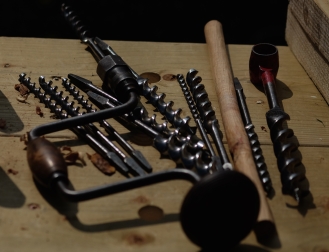 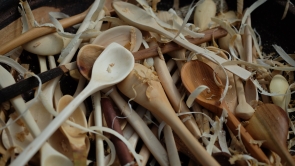 It was a very busy and eventful show which had other stands of traditional rural skills selling their wares plus some exciting arena displays for the public. A few things caught my eye and I think the show winners for me were the cutlery birds – stainless steel so they can decorate your garden without ever rusting- what a novel idea for all those unwanted knives, spoons and folks. I did also admire the trunk and chest made from one solid piece of tree trunk… wonder if the word ‘trunk’ comes from the fact you can make a trunk from a trunk? 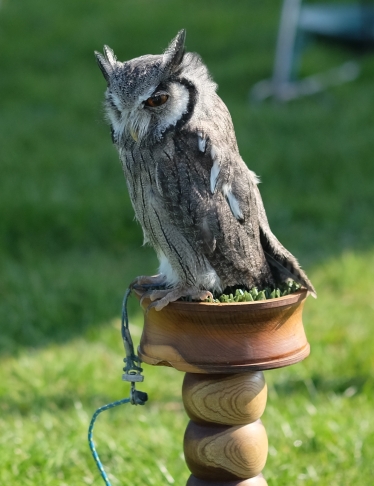 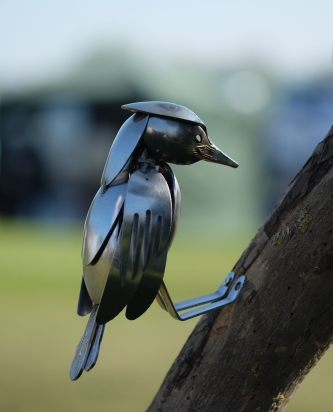 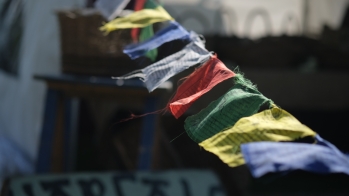 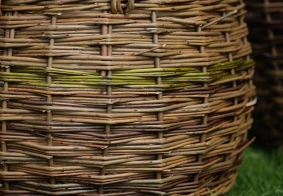 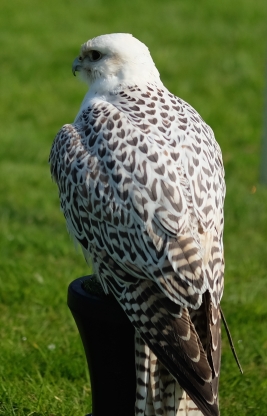 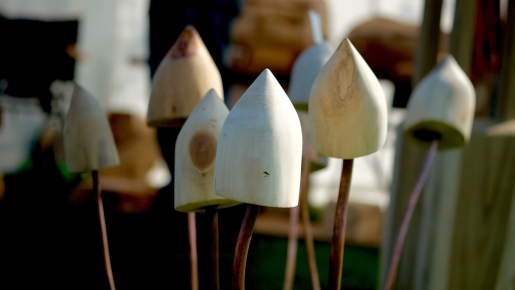 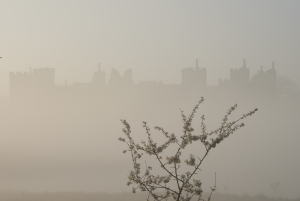 Apparently the Mere was dug to make the castle mound and used to be a lot bigger, however I’m not sure soil would make good foundations for a castle. Its wildlife is equally special and the reserve is best known for its sedge beds – a rare habitat in Suffolk and a stream of migrating birds. There is apparently a wonderful show of marsh marigolds but they had only just started to flower while we were there then there are other wetland plants like the delicate ragged-robin and lady’s smock in spring and, if water levels aren’t too high, birds like green and common sandpiper and snipe can sometimes be seen.

The Mere is used by a lot of people

A build up of silt over recent years resulted in restoration work being carried out by Suffolk Wildlife Trust, Framlingham College and the Environment Agency. This involved removing over 40,000 tonnes of accumulated mud from the Mere to restore water levels and wetland wildlife, pollarding historic trees and planting new ones and improving information for visitors. Wildlife has already responded to the improvement in water quality resulting from the restoration and its a delight to walk around especially early in the morning in the mist. Below is another gallery of the Mere on my morning walks with the dogs. 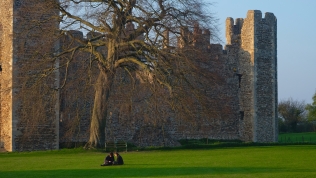 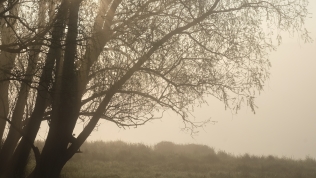 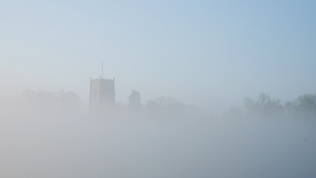 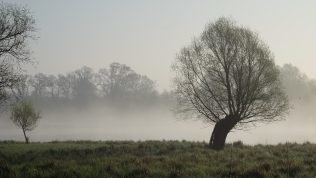 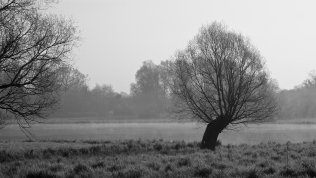 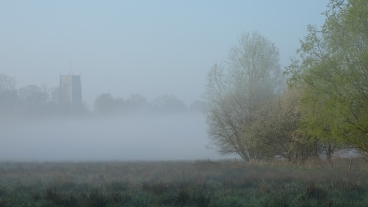 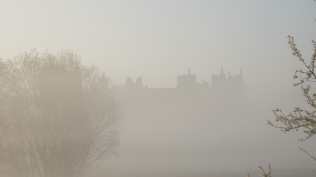 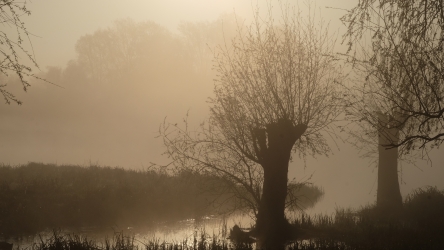 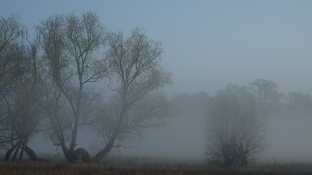 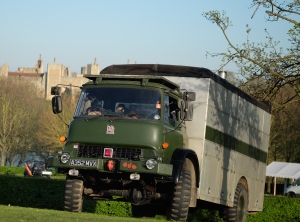 Even some historic sights on the way home

Just outside Framingham you’ll also find the Saxtead Green post windmill which was built in 1796 – quite a pretty windmill and owned by English Heritage, as is Framlingham Castle, both are worth a visit and thoroughly recommended.

The normal Wympole bodgers’ day later in the month was a much quieter affair but we did make more bespoke birch bowls and spoons. I have neglected to say that I had also brought back some mountain ash aka rowan. We were not sure what use the wood was but, as it turns out, it is a superb choice for making spatulas, seems to have the right qualities – rather fine, reasonably dense wood. 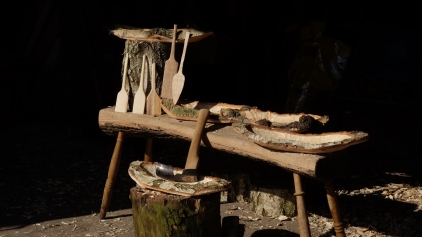 Items made from April’s meeting