March- a time for tree surgery, hedge laying and spring

This is John – he does the weather forecast at Wimpole

He’s being hanging around Wimpole for some time now and knows all the ins and outs of the weather, today he said it was dry. I could have told him that!

Pollarding a willow by the lake

March was the month for tree surgery and a very good friend came to help (paid of course), plenty to do what with Storm Doris.

An old horse chestnut to do 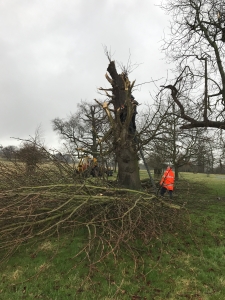 There were quite a few trees to do this year in the park and woodlands –  one horse chestnut tree required re pollarding, this one was blown to bits many years ago but now needed to have a haircut (short back and sides) as the regrowth usually plucks out as the limbs get larger. 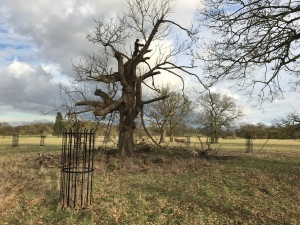 Another one was looking somewhat dead so we reduced it to save the bulk… just as well as, while the work was going on, a barn owl popped out of a hollow section in the tree. I have to say that, since the in hand estate went organic and more grassy margins have been put in, the owl population has increased at least five fold. His home will last a lot longer now.

Below is a small gallery of some of the tree surgery work undertaken this year and removal of timber.

Ash tree reduced because of a fungal infection

Carting away the storm damage in the woods

Taking a break up the willow 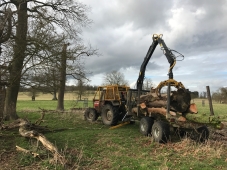 Carting away the timber 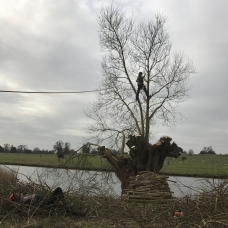 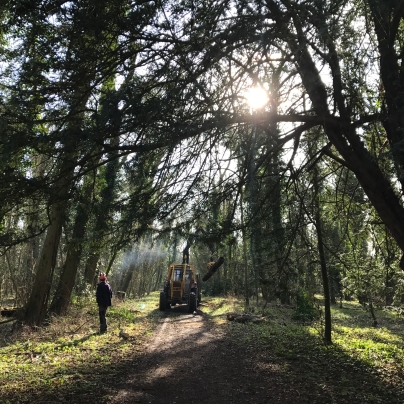 Making safe along the woodland walk

Reducing lateral limbs on a horsechestnut 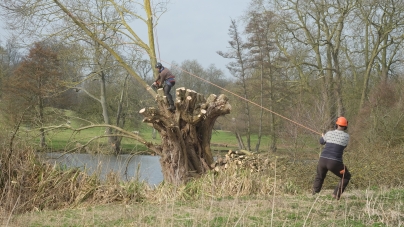 Nearly done with the willow pollard 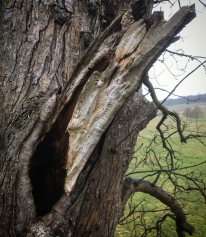 One of the many things you have to think of when working on veteran trees is the micro habitat – rotholes, deadwood and cavities can be used by all sorts of wildlife (birds and bats but also invertebrates) so we retain these where we can. It can be achieved by limb reduction but, rather than leaving a flat cut, we actually make the cut look natural which does indeed make the tree look like it’s storm damaged but it can also help harbour tree-dwelling insects like solitary wood wasps and the like. 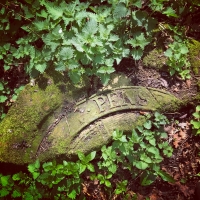 First section of a coat of arms 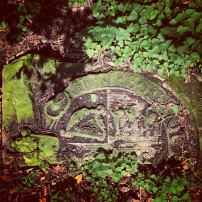 Second section of a coat of arms

The order’s emblem is a garter with the motto Honi soit qui mal y pense (Middle French: “shame on him who thinks evil of it”) in gold lettering and this is what is carved on the outside.

From Wiki :                ‘The Most Noble Order of the Garter, founded in 1348, is the highest order of chivalry and the third most prestigious honour (inferior only to the Victoria Cross and George Cross) in England and the United Kingdom. It is dedicated to the image and arms of Saint George, England’s patron saint. Appointments are awarded at the Sovereign’s pleasure as a personal gift on recipients from the United Kingdom and other Commonwealth realms. Membership of the Order is limited to the Sovereign, the Prince of Wales, and no more than 24 members, or Companions. The order also includes supernumerary knights and ladies (e.g. members of the British Royal Family and foreign monarchs). New appointments to the Order of the Garter are always announced on St George’s Day (23 April), as Saint George is the order’s patron saint.’

With the help of the timber crane we removed the stonework and ferried it to the gardeners’ shed where they then installed it along the Explorers Path and also added some ferns. Both pieces together must have weighed about two tons so not an easy installation. Wonder what other treasures lie within the woods at Wimpole?

Last of the hedge laying for the year

The last hedge laying job was to finish off the hedge we had already laid some time back but had not finished the binding  (all the binders came out of an overgrown elm hedge), plus we cleared up the firewood and Jacob found it easy to move his sheep (as before they could scuttle off through this hedge, now definitely sheep proof). 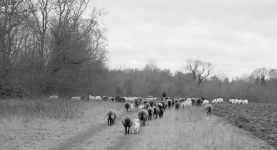 Hedges that keep sheep in

Plenty of firewood too 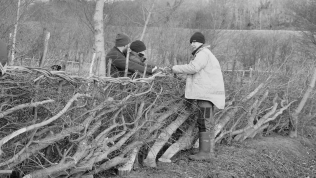 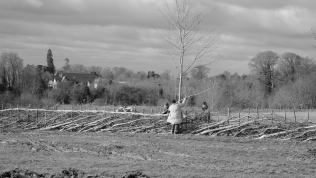 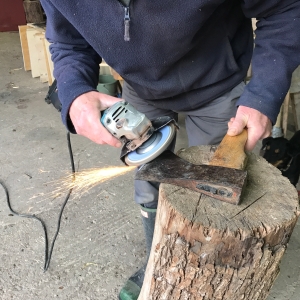 Sharpening the tools of the trade

We also had the hedge laying course which was well attended. Prior to the day all the tools had to have a sharpen- sharp axes and billhooks make for easier work. Notice the new method we use!!!!!! Actually, because we use a sand flapper disc  with a fine grit, it’s easy to get perfect edges and especially useful when you have all the course tools to sharpen.

A bit of a dull day but the last section of hedge was laid next to Cobbs Wood Farm and we used elm binders again. A lovely day with the course participants who I hope learned a lot and enjoyed themselves. 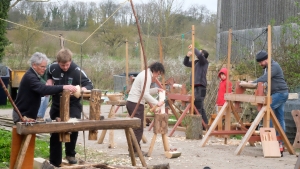 The next day after the hedge laying course we had the Wympole Green Woodworkers at Cobbs Wood Farm and an unusually large number of people turned up to enjoy the day including passersby. It was also pleasing to have a few youngsters having a go with one young man turning a well made dibber on the pole lathe. A new venture for the group was to procure some good straight oak about a foot long and one and a half feet in diameter for the purpose of making oak shingles.

To make oak shingles you have to cleave the oak in half, then half again …and again, and again… until you get thin wedges which are then cleaned up on the shave horse with a draw knife. A small gallery of the day is below. 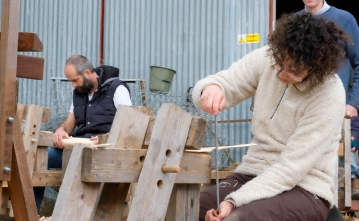 Is that John cheating!!! 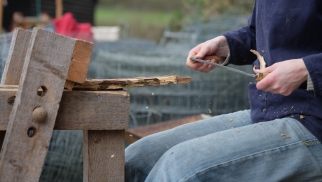 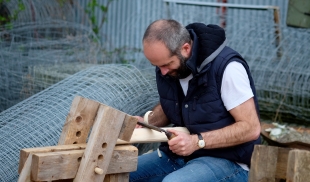 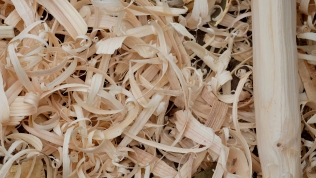 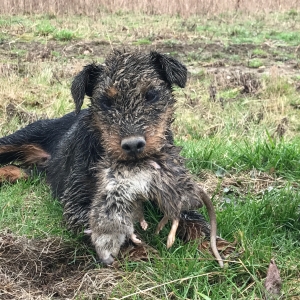 Still plenty of rats about and a job for the Jagdterriers who rather excel at catching them.

Meanwhile, Albert was single handedly ploughing and cultivating the spring cropping land. Time was of the essence as both spring wheat and barley had to be sown before the end of April. However a dry spell stopped the plough land from slaking so the power harrow had to be employed to make an adequate seedbed.

Farming is always quite risky because of the weather, this prolonged dry spell will slow the germination down. 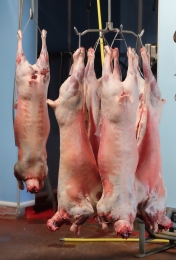 Jacob, who has a large flock of sheep that grazes on the arable ley land in the winter (clover leys that build up fertility on the organic farm), invited me to go to an abattoir in north Cambridgeshire, so I took the day off and went to pick up the hoggets he had taken up the week before. I was very impressed by the cleanliness of this quite small abattoir and doubly impressed with the quality of the Dorper sheep carcasses, most weighing in at over 45kg dead weight. Interestingly I was able to purchase minced raw meat for the dogs, a much healthier way to feed them. 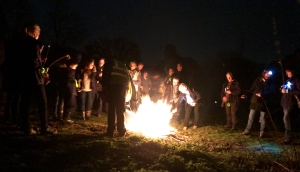 The night run and toasted marshmallows

During March Wimpole hosted the night run and most of the estate was open to the general public with some of them taking the chance to do a late night walk through the parkland with toasted marshmallows up at the Folly as a reward.

On the wildlife side things were beginning to happen: spring was on its way.

Sweet violets were blooming all over the estate and down by the lakes there were literally thousands of primroses but the most surprising sight was the number (hundreds) of toads we found spawning in the top lake and the stream flowing out of the bottom lake. I have not seen such a sight at Wimpole for nearly thirty years and, having seen thousands of toadlets and froglets in the flower rich Folly Field, I strongly suspect that they thrive in grasslands which have plenty of insects and to get these you have to be organic and have very diverse grasslands.

Below are some landscape photographs of the month. 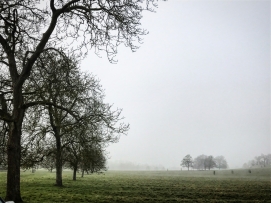 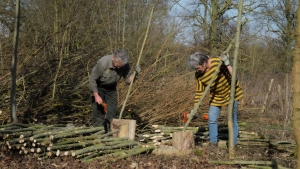 After all the tree surgery we started on the chipping and clearing up, it’s easy to make a mess but a lot harder to clear it up… 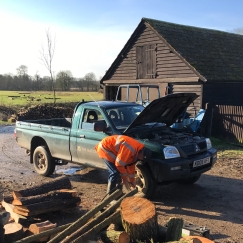 Loads of maintenance to do

There was also the brick wall that blew over in Storm Doris. To get access the little spinney had to be thinned and as usual we made as much use of the arisings as possible, as it turned out we made 200 stakes for next year.

New starter motor for the Ford

Oh boy! Vehicle maintenance is an ongoing job… the Mitsubishi needed some TLC while the Ford Ranger needed a new starter motor, not an easy job (but actually easier than putting one into a Land Rover Defender). I wonder what April will bring?