Simon Damant has ruined my holidays forever! by Shane O’Reilly

A long road to nowhere

We had planned our three week expedition to Madagascar meticulously to take in all aspects of the country; its flora, its fauna and even its lesser known geology. Trying to avoid the tourist hotspots and beaches, we started in Tana (Antananarivo) the capital and headed South criss-crossing to pick up the sights as we went. A small picturesque island off the coast of Africa, it was to be a mix of photographic and David Attenborough opportunities interspersed with sampling the local cuisine and drink and generally putting one’s feet up.

Who’re you looking at!

The drive from the airport to Tana should have been a portent about the prospect ahead as we covered 5 miles in an hour of crawling traffic past sprawling suburban shanty towns with every possible trade and service spilling out onto the street. Our trip also coincided with the Francophone conference, the French speaking worlds’ version of the Commonwealth. Their annual meeting in Tana meant tight security everywhere with visibly heavily armed police at most crossing points and even armoured cars stationed in the centre of major junctions – what had we let ourselves in for?

The first night in any strange location is always disorienting but we gradually recovered in our first hotel with some Three Horses Beer (THB) and pasta. THB is the Malagasy own brewed lager-like beer and went down well, the pasta? Well better not to start on the local cuisine too early – comfort food after a long day travelling.

So bright-eyed and bushy-tailed we set off the next morning on the trip proper or at least after another hour of struggling out of Tana. First stop, the Andasibe national park for a guided walk through the rain forest looking for lemurs. Our guides were typical of most we encountered in that they spoke English after fashion, preferred French but boy did they love to talk in Malagasy.

What chance of seeing an animal that inhabits the tops of tall trees in densely overgrown bush – well actually it turned out to be excellent. We had a spotter whose job was to find the animals and report back and a guide who filled us with local knowledge of the plants and their uses and historical use of the land. With their guidance we saw lemurs of every description as well as  chameleons, skinks, gecko’s, insects, snakes – the information and sights were mind-blowing and difficult to retain especially as the guide reached out to my face and said  “Hold still” and picked something off and threw it down. “Leech” he offered by way of explanation.

“Eeeeoooo” the ladies squealed and began a thorough search of their own persons for similar and of course were well rewarded. These small invertebrates drop from the leaves and crawl up open trouser bottoms to find succulent flesh before feeding and dropping off. It did come as a shock especially as we were all well covered with long sleeves and trousers but we did find them in the most intimate of places! 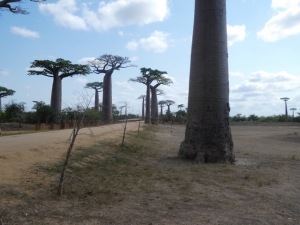 Our trip proceeded in similar fashion travelling South with the temperature getting hotter and the scenery and way of life getting more and more primitive. Our driver skilfully threading his way along the only road as we encountered potholes , lunatic lorry drivers and herds of long horned Zebu which were driven by small boys with sticks with little regard for traffic. As the temperature increased, at times to reach 40oC, so too did our water consumption and energy levels sagged. The locals seemed unaffected by the heat and could be seen working in rice paddies or clearing woodlands in full sun. 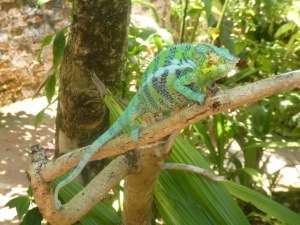 We had to consume at least 2 sometimes 3 litres / day just to stay hydrated and occasionally in the bush we did come across a local with his arm raised with an empty bottle and our team would drop out a bottle of our reserve as we drove by. Water was clearly an issue in the South as we became aware of the local children walking with plastic drums to or from wells  or rivers and home. At least the dryness meant the end to leeches.

We arrived at our most Southerly point in Andringitra, a Grand Canyon like park with spectacular geology and yet another change of the flora and fauna species. The “spiny forest” being typical of the necessarily drought tolerant species. Also famous is the Baobab tree of which there are many variants but the most celebrated are the giants that for millennia have withstood attack from man, beast and the elements to remain aloof and imperious. The “Avenue of the Baobabs” is probably the most photographed sight in Madagascar. I could only admire a tree that seemed impervious to everything life threw at it, they are truly awesome. Ironically, for me it was this avenue that was to trigger the “Damant” effect. 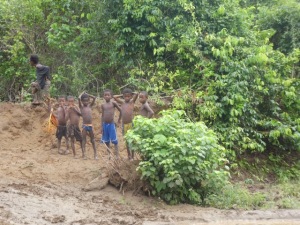 It wasn’t an immediate light bulb moment but something that dawned on me later as I thought about our trip.  We had encountered some “Peace Corps” students on an overland trek to ‘Pic Boby’ and in the dark evenings without recourse to electricity or any modern conveniences you have to converse. These students spend a year placed in communities around the world funded by the US government. They are taught the local language and with their specialities intended to educate the locals and improve their way of life – noble sentiments indeed. Of the the 3 specialities discussed, the first was birth control. Malagasy people think to have large families is to be wealthy and indulge themselves such that everywhere there are myriads of little children usually sucking a mango but mostly looking mal-nourished, and poorly clothed. The second was health and how the locals prefer, unsurprisingly, to use their traditional potions and not modern (expensive, American ?) medicines.

Finally we discussed farming methods and it transpires that if anyone can clear and maintain a forest for at least six years they then own that land. This explains why most of the male population were carrying axes as they went about their business. Now I was suspicious of the American motives in indoctrination and trying to bring Madagascar into the modern world but I also reflected on the Avenue of the Baobabs and how these magnificent trees would, if left naturally, be surrounded by dense rainforests and not barren desert lands. How could the Malagasy destroy this beautiful landscape with its abundant diverse biology, what can we do to stop the destruction and enable a more eco friendly existence. It seemed an irreversible problem increasing population, little birth control, poor diets, an increasingly exhausting hinterland. 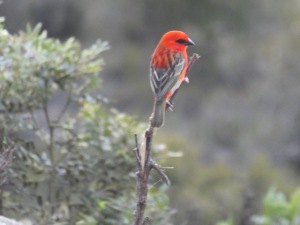 Working with Simon and the forestry department in maintaining the woodlands and hedgerows has exposed me to his constant diatribe about what we are doing and why we are doing it. How laying a hedge, rather than the modern method of flailing, improves its strength, retains berries and provides habitat for wildlife. How scything and wildflower meadow expansion rather than aggressive mowing and fertilisation improves the aspect and quality of the pastures. How selective felling of trees to provide “rides” through woodland allows native specimens to thrive and creates eco-spheres for the abundance of life that needs the unique macro-environments created. So in Madagascar I saw firsthand what uncontrolled exploitation or resources could do to a country.

Back in the UK and reflecting on the Madagascan trip, I realised that our treatment of the environment could be seen as equally harsh and unsustainable as I considered their’s to be and was struck by my own western arrogance. How could I judge other nations when I am contributing, albeit blindly, to our own loss of environment. So when I say Simon Damant has ruined my holidays forever I didn’t actually mean I wont indulge myself again, c’mon, don’t you know me? No but I will view others and their life styles with a less critical eye and try to understand a little more deeply and thanks to him I will view it with an eye on sustainability. I also hope that those in places of power will also appreciate the benefits of the less intensive methods of land management. 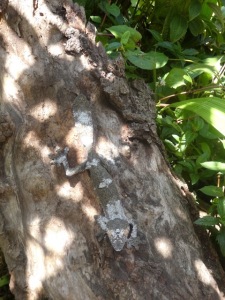 1 Response to Simon Damant has ruined my holidays forever! by Shane O’Reilly