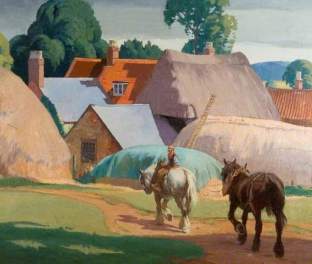 The rock-like mud unfroze a little, and rills
Ran and sparkled down each side of the road
Under the catkins wagging in the hedge.
But earth would have her sleep out, spite of the sun;
Nor did I value that thin gliding beam
More than a pretty February thing
Till I came down to the old manor farm,
And church and yew-tree opposite, in age
Its equals and in size. The church and yew
And farmhouse slept in a Sunday silentness.
The air raised not a straw. The steep farm roof,
With tiles duskily glowing, entertained
The mid-day sun; and up and down the roof
White pigeons nestled. There was no sound but one.
Three cart horses were looking over a gate
Drowsily through their forelocks, swishing their tails
Against a fly, a solitary fly.
The winter’s cheek flushed as if he had drained
Spring, summer, and autumn at a draught
And smiled quietly. But ’twas not winter–
Rather a season of bliss unchangeable,
Awakened from farm and church where it had lain
Safe under tile and latch for ages since
This England, Old already, was called Merry.

You may ask why "Sadeik" well it means friend in arabic. Worked in Jordan a lot doing tree surgery you see. I have worked in forestry since I left school with a two years in Telecom. Went back to forestry and tree surgery as it may not have paid as much but was far more interesting and dangerous. Spent a lot of years mountaineering, caving and canoeing too. At 29 I went to Bangor University to study Forestry and soil science then did an MSc in Water engineering all very interesting. By a quirk of fate in 1995 ended up helping sort out the woodland and park at Wimpole, funny thing was then I only intended to stay six months or so, but 18 years later I'm still here learning all the time. That's the best bit, if I wasn't able to learn something new every year I would not have stayed and as you get older you realise that the grass is not so green in the next field after all. In fact my patch is getting greener while much of the rest is getting browner.
View all posts by Sadeik →
Quote | This entry was posted in Uncategorized. Bookmark the permalink.