The Octagon in a shaft of light

It’s not often that visitors to Wimpole Estate get out as far as the Octagon or even know of its existence. The Octagon is a large pond that lies beyond the road that splits the Hall from the end of South Avenue. South Avenue gives the visitor a glorious view and one can only be amazed at the foresight and wealth that created such a vista. In our role as forest volunteers we expect to cover a large number of miles in our working day and to work away from such comforts as toilets and electric kettles. At the Octagon we are about as far from hot tea as we can possibly be.

Tea break for the cows outside in the cold

We are of course recompensed with the joys of working outside, which according to the time of year can range from below zero to sub tropical temperatures, with wind, rain, sleet and snow, in short, everything the weather system can throw at us. The end result is that we often return to the nearest staff room for tea looking like we have been dragged backwards through a hedge and when we are “chipping” it is more precise to say it’s us dragging the hedge backwards. 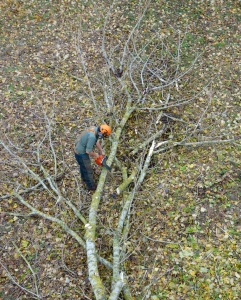 We had been preparing the ground for weeks, with the removal of the wire and post fencing that lined the avenue and the Octagon pond area. The plain and barbed wire combination is troublesome to remove and dispose of and when faced with miles of it, it can seem an endless task but with each day, the teams gradually cleared this area of the fencing that was long past its best. Now came the trimming phase, the removal of the bush and tree growth that had erstwhile been protected by this wire fence.  We started with the removal of seven large Poplars near the bridge. Well established trees, heavy with branch and foliage, they proved to be hard going as chain saw and chipper teams worked together to bring  them down. Their removal however gave the view from the Hall a new horizon, the Octagon. 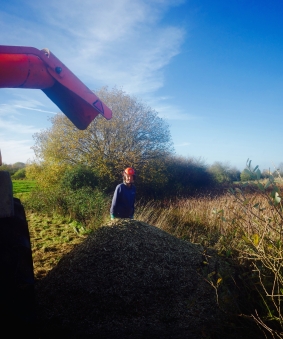 Then there was large Octagon pond which had also become overgrown with Willow trees and Blackthorn bushes around its outer edges. The Blackthorn is, at this time of year, heavily laden with sloes, but if you’re a purist you’ll need to wait until we get a frost for the best sloe gin. It is also armed with the toughest thorns you can imagine, so when Simon announced that we would ‘just knock that clumps down’ we knew basically what it entailed. Looking back now it was as if Edmund Hilary had said to Sherpa Tensing ‘Let’s walk up that hill’.

The chain saw gang set about felling the trees, bushes and trimming them. Each tree and bush was brought to the ground and the branches trimmed off flush and the trunk retained for logs if it is of any size. Indeed if the branches are of a loggable size then they too are retained. Each tree and bush and there were many of them, ( plural ‘clumps’) ranged in size from about 3” (apologies to younger readers) to 6” diameter and as such were of substantial weight. Felled and trimmed, ‘the chipper team’ would pull out all the discarded branches and force them into the gaping mouth of the “Timberwolf”.  First thing, we were fresh, energetic and keen to get warm, so the activity kept our heads down and we focussed on the job. As bough after bough was fed into the ever hungry ‘Wolf’ we began to tire and look back at the clumps to see if we were reaching a conclusion. No sign of any impression was being made there. The clump laughed at us and continued to have an imperial presence on the edge of the Octagon. More came down, were trimmed and ground into chips and the piles grew higher as did the logs laying about. Have you ever dragged a 3” diameter branch and persuaded it to go into a chipper? We wear leather clad gloves and hard hat with face visor and ear protection.  Communication comprises lots of signs and rude gestures and an occasional grunt. The sweat, even on a cold day, quickly builds and trickles down from under the hat band into your eyes which the novice tries to wipe away only to find their hand engaging with the face visor. As our limbs grew tired, watches were scanned to see if tea time was anywhere close. “We’ll just knock down the last few before we go” Simon said as we flagged, giving us incentive and renewed energy to get the job done. Wallop, the last trunk came down and we fell on it. Dragging for all we were worth, its severed branches were stuffed into the throat of the ‘Wolf’. 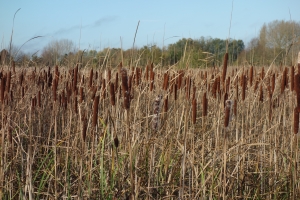 Finally, we stood motionless and looked back at the scene of the clump now cleared and giving a view of the Octagon and its reed bed that hadn’t been possible before. Fatigued, I was however intrigued enough to go over and count the stumps. Forty, yes forty, and the stumps are still there, so you can go count for yourself. That’s a small wood! All felled, cleared and chipped before coffee, now that’s good value in anyone’s book. Never has a Custard Cream been so well deserved.