A stairway to heaven (not quite!)

Nothing so pleasing as seeing the Silver Spangled Hamburg chickens scratching about at Cobbs Wood Farm especially the cockerels who strut about and crow from high vantage points.

While I was away the forestry team kept busy by taking out the stock fence that was on the skyline . It was an eyesore and the reason why we installed the iron park rail fence to replace it just recently. The wooden stakes can be used again or converted into firewood. When we put this replacement fence in eight years ago I bought untreated sweet chestnut stakes: firstly because it kept coppice workers in 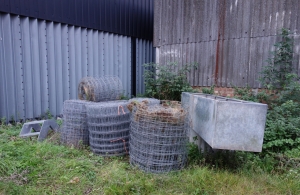 Stock netting from the park saved and stored

Kent in work and it managed the wood, secondly because I knew at the end of the stakes’ life they would have to be disposed in the right manner and, as these stakes were untreated, they could be used for firewood thus saving money rather than having to spend money (getting them disposed of in the proper waste site if they had been treated). After this fence had been cleared away they set about removing the last fences in the South Avenue. All the wire and metal from these fences had to be skipped in our recycling skip.

A stairway to heaven

Another job jobbed was the staircase so that we can make use of all that space on top of the containers. Mind you we can’t use it until we get more guarding made up so that nobody falls off the top!  Also, between the gardeners and the forestry team, they collected the old limestone setts that had been left lying about and they are probably worth £4/£5 each.

CNTV were in taking down a fence in the South Avenue

The Cambridge National Trust Volunteers were in one Sunday to help remove the last old stock fence in the South Avenue- a grand help as, by the end of the day, there was only the Octagon lake’s parameter left to do and that’s actually quite easy  (a day’s work  for two people I reckon). 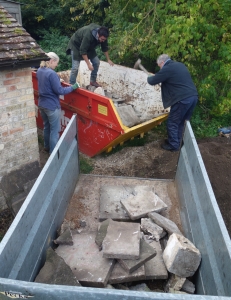 Better in the farm track than the skip

Back to work after my trip to Jordan and it was time to do some more clearance work at Cobbs Wood Farm… but not before we had emptied a skip by the Keepers Cottage which was full of useful rubble! The thing is that this  skip, that came from one of the local refuse companies,  costs £135  to deliver and take away and a further £110 per ton of general waste. The minimum payable is a ton so we reckon we took about two and a half tons of rubble out (a saving of £275) and we got to use this to fill more of the worn out farm tracks at Cobbs Wood Farm which would have cost me £40 to buy in. Good result! Out of interest- if you do fill skips try to not fill them with inert soil or rubble/bricks etc as this only costs £35 per ton to dispose of plus the cost of the skip. If you throw this in with any general rubbish you get charged the full £110 per ton hence the default cost of £110. (Incidentally a recycling skip only costs £55 per ton to dispose of so it is worthwhile separating it from the general waste so that it can be recycled.) 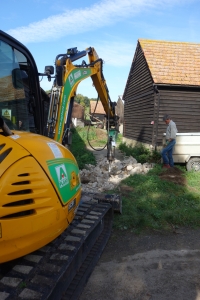 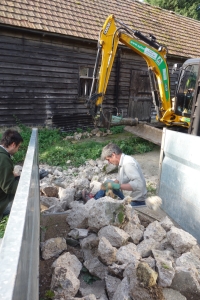 The premises team also helped us to sort out Cobbs Wood Farm- they had a digger in for a job down at Home Farm so, rather then leave it idle, they also hired a jack hammer to bust up a concrete wall blocking one of the entrances to the farmyard at Cobbs Wood. It was once a raceway for getting reared pigs onto the livestock lorries. Having done this I asked them to break up some huge bits of concrete that had been taken out from the front lawns many years ago – too big for us to break up by hand but not so big that the digger and jack hammer couldn’t. 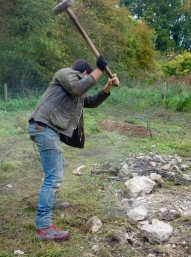 Busting up the smaller concrete to remove the iron reinforcing rods

All this busted concrete was then used to fill in even more holes in the tracks but some of it had reinforcing rod in it. Then it was back to the manual method so that we could recover the metal and prevent it from puncturing tyres. We also discovered quite a few natural stone cobbles under the concrete in the farmyard which we saved rather than throw them into the tracks. These can be stored and used at a later date to repair some cobble floors like that at the nag’s shed up at the Folly. In all probability these cobbles were picked off the arable fields by children in the Victorian period or earlier as this was quite a common job for the young people at that time and almost the only local stone available. 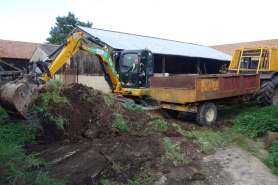 Another job that had to be done now that we had access to the yard and could use the digger bucket was the really old muck heap (well rotted down and a useful organic fertiliser for the arable farmland).

Found quite a bit of old metalwork lying around just cluttering up the farmyard and getting in the way. Time for it to go but not before it was cut up so that it could fit into the metals skip. 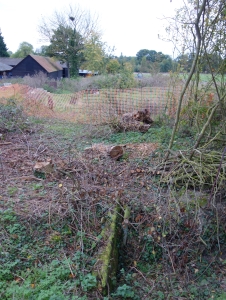 Found the fire hydrant and tested it

Always wondered where the fire hydrant was! Found out that the top number on the yellow fire hydrant sign is the size of the pipe ( in this case a 100mm pipe). The lower number (in this case 4 ) shows how many metres it is away and a further, smaller number is the fire hydrant identification number. Paced out four metres and… bingo! Found it, cleared away all the soil that was covering it up and opened it up. Time to test it… not that you are normally allowed to but John has a friend who has a steam engine and steam engines need water regularly and fire hydrants are everywhere so, for a fair sum of money (something like £300 for six or so months), you can rent a fire hydrant key from the water board. John borrowed the key, opened up the valve and… out came some rather dirty water. A minute a later it was clean and so now, if we should have a fire up here, we know where the fire hydrant is and that it works. 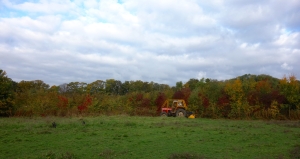 Mowing in preparation for the hedge laying course

Another job to do was to mow and trim out all the grass, brambles and excess scrub alongside the hedge where the hedge laying course was going to be… 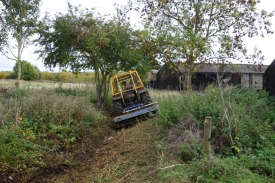 Now for the tree guards

Quite a bit of work to do but, with the help of our new Bomford Euro mower, we made short work of the shallow ditches. I do like ditches that have shallow profiles, very good for the wildlife and much easier to deal with when mowing.

…and taken to the general rubbish skip

As this hedge had been planted by me with some volunteers it had plastic trees guards on it and these are best removed , not a pleasant job but necessary all the same. We bagged all the guards as they can’t be reused and unfortunately they had to go into the general waste skips as these guards are not recyclable.