They hit a brick wall!

Just before I left for Bulgaria Justin, the dogs and I went for a walk in the South Avenue (mostly because I wanted to see how the wild flowers were growing – we had green hayed this field last year). What was quite striking was the amount of wild carrot that had begun to flower. Once a very poor grassland with perhaps only as many as five species per square metre, now I can count up to ten- it’s definitely improving. Only thing was I lost the house keys on the walk and my god it was like looking for a needle in a haystack. Lost they definitely  were! Whoopee… by sheer fluke we found them later on in the afternoon when walking back despondently after another fruitless search. 🙂

So what happened after I left for Bulgaria and the appointment with a car?! The Tuesday mowers kept mowing but this time in Victoria Avenue  and all this cut grass was destined for the field behind the Cobbs Wood Farm. It’s the second time we have put green hay there as it appears that it didn’t work the first time probably because the field was grazed too short to allow the new seedlings to establish. Without grazing though the grass will simply swamp the new seedlings and smother them to death. So this field and Folly Field should be grazed with sheep this winter. 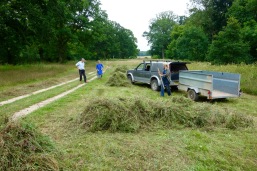 Green haying is an arduous job but the rewards can be great. Over the years we have gone from one small flower rich meadow to over five although these have some way to go before they get as good as the Victoria Avenue flower meadow. By the time I got home most of Victoria Avenue had been mown and the green hay carted away. 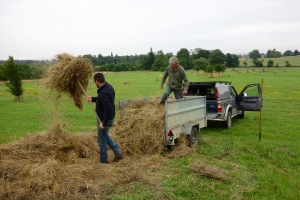 Clearing up some old stacked hay from Folly Field for John the horse.

Missed a digger course while I was away but both Tom and Paul attended and passed. Now we’ll be able to do a lot of the digger work on the estate instead of getting contractors in. This is especially important when digging around places where there might be some archaeological remains. Contractors are paid to do a job and so will do it as quickly as possible, even digging through the archaeological evidence, now we can do that job and stop if necessary until the regional archaeologist Angus Wainwright has inspected it. Got to be a good thing and it gives the lads very valuable experience and training to help them further their careers. 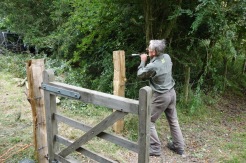 Also on the agenda was the footpath that goes through Thornberry Hill Farm. This one has always be a thorn (!) in my side. Who is responsible for the upkeep- the tenant farmer or National Trust staff? It all depends on what has been written in the tenanted farm agreement. As to the question of stiles versus hand gates or kissing gates… I prefer stiles where there is livestock especially when there are entrances next to main roads as gates can get left open. Kissing gates are ok but the newer ones allowing wheelchair access can be a real liability as the sheep seem to be able to work out how to get out of these. Hand gates are ok but really must be hung in such a way that the gate can swing shut by itself and are put on so that the gate swings into the field. That’s because when it shuts and the livestock push against it, it won’t open as they are pushing the gate onto the posts. Two hand gates were erected and stiles removed. Good job.

Heritage barley for the farm

Down at Home Farm the staff there wanted a harvest display so the Chevalier barley was carted down to the Great Barn for a threshing display- only took a small portion so loads more to hand thrash.

They hit a brick wall!

Another job was the park rail fence down at Arrington- we had left this job for later but while I was away it provided the forestry team with work. Trouble was that it was slow going what with all that concrete but the job became even slower with the brick wall they kept finding.  This area was once the US army WWII hospital for the bombers that flew from Bassingbourn. It was a massive complex which was removed some time ago but obviously not all of it! Ah this job is going to be rather a long and drawn out affair…

Just before I returned licking my wounds the team were setting up for the Folly Conservation Weekend. We were going to show off many of the traditional rural skills used to build the Folly in the eighteenth century with associated courses.