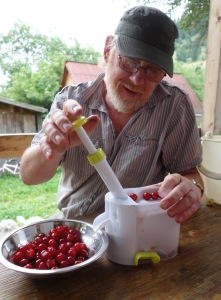 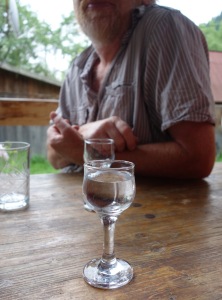 The last few days of our trip to Romania were just as entertaining- we took the time to see the man who made rakes again as we had ordered some rake heads to take home ( the most exquisite design I have ever seen). Then it was off to see  a man in the village who had a bee house, yes a honey bee house. I was very interested to see this as it is something I’d like to have, something like a dovecote I suppose. Unfortunately it was no longer a bee house but a log store; however  you could see that it had once housed about thirty hives. After looking at the bee house the owner invited us for palinka (all homemade from whatever fruit etc you can ferment  and it has to be double distilled to be called palinka). While having the palinka we noticed the cherry pip removal device and so it wasn’t long before it turned into a competition to see who could pip the most cherries in a minute. Richard did rather well but the owner beat him fair and square… time for another palinka to celebrate 🙂 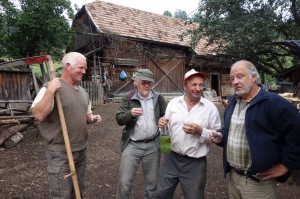 Last day arrives and some more palinka before work!

The last day and we had a small 33 acre meadow to mow (remember Romanian acres are only 1000 square metres) but not before the customary palinka from Sultan’s father to start the day . 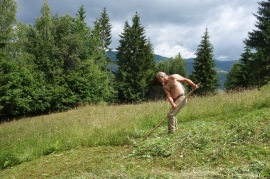 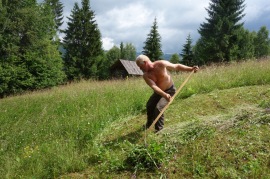 One thing you do find out is that the Romanian men and women will go abroad to find work to supplement their money as wages in Romania are a lot less than in the UK and elsewhere in western Europe. Sometimes the pay is as low as £10 a day so it makes sense to find work in other European countries where the pay is much higher. This extra money pays for building work and nice things back home and so it was with Sultan- he was off to Norway for five weeks and needed the meadows mown. We were of some use then! 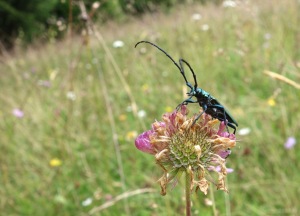 As usual there were heaps of insects but a bright metallic green longhorn beetle caught my eye. Back home I would have said this one was a musk beetle (which have larvae that feed in willow wood) not sure if it’s the same species though. 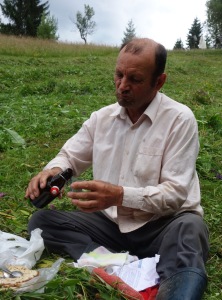 Oh, time for a palinka break… 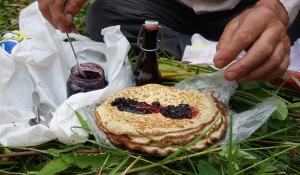 Hard work this mowing lark- stopping every few hours for a break, some crepes covered in bilberry jam and of course some more palinka. Odd how you can drink while doing physical work! In fact at each stop it is only one wee dram but it seems to be a sort of pain reliever/energy drink and makes the working day go well. The effect of the dram soon wears off though once you’re back to work. I can see why the men in old England were given beer throughout the day, an energy drink that was also safe to drink. Oh for the old days at work! 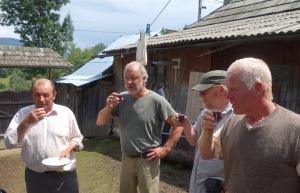 But not before some more palinka

Well that meadow was done so back to the farm… another palinka  and off to mow a strip of land with barley and lucerne in it. This was a parcel of land on the fertile valley bottom hence the reason why they could grow a fodder crop (and, as I have said before, people have bits of land everywhere). Had to be careful mowing the boundaries as they usually mark them with stakes or rocks all hiding in the long grass ready to jump out and clash with the scythe… oooops! 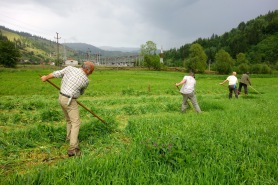 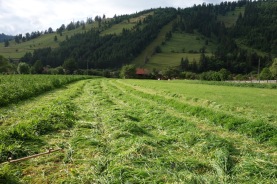 A thick sward but easy to mow and wide enough for the five of us to mow in a staggered line. It took about an hour’s work to mow this strip and we then spread the cut grass on the way back. Incidentally, it seems to be part of the  mower’s job to walk back over what you have mowed and spread it with the scythe, either with the blade or with the top of the handle/snath. 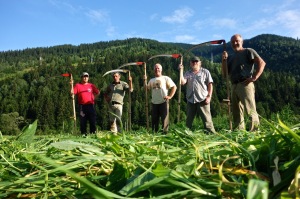 That’s it, finished mowing and spreading 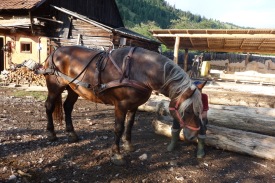 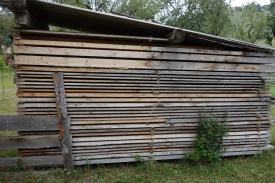 On the walk back we went passed a local sawmill with a working stallion- a very strong-looking horse. Forestry is the other rural occupation in these parts with the conifers being mainly used for building work and the broad-leaved trees for firewood. Maybe another year I’d like to come back and do some traditional forestry work using horses, that’d be interesting! 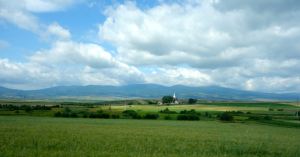 Time to go home… but even the drive back to the airport at Targu Mures was interesting. As we drove straight back across Romania it was interesting to see that even the flat areas had many strips of land; in places like Hungary you see massive fields. Also it was obvious that a lot of the arable/grassland in  the more rolling hilly areas  was in fact being taken over by scrub and forest. With many young people leaving the countryside there are fewer people to manage the land and so nature is taking it back and this is a major concern regarding the rich mountain flower meadows. 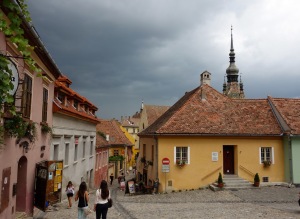 Had a stop and a look around Sighisoara which has a very charming old Saxon town centre. From Wiki, ‘During the 12th century, German craftsmen and merchants known as the Transylvanian Saxons were invited to Transylvania by the King of Hungary to settle and defend the frontier of his realm. The chronicler Krauss lists a Saxon settlement in present-day Sighișoara by 1191. A document of 1280 records a town built on the site of a Roman fort as Castrum Sex or “six-sided camp”, referring to the fort’s shape of an irregular hexagon. Other names recorded include Schaäsburg (1282), Schespurg (1298) and Segusvar (1300). By 1337 Sighișoara had become a royal center for the kings, who awarded the settlement urban status in 1367 as the Civitas de Segusvar.’

It’s been an excellent trip with good friends.

For those wishing to go to the Eastern Carpathians  to experience the rural life and glorious hay meadows one could do no better than go to this link and I suspect that should you wish you could organise other times too.