Sultan and his family

After seeing Prince Charles’ farm it was off up into the mountains further east where we stayed in the Gyimes valley. The Csango people who live in the Gyimes Valley possess a knowledge of haymaking unrivalled in western Europe. The ancient Csango people settled in this wild, secluded valley in the Eastern Carpathians hundreds of years ago and, in order to survive, they had to develop special life and land use skills and styles that would help them to live in harmony with nature. Haymaking is probably the most important activity in the Gyimes Valley (and elsewhere) because people are mainly occupied in animal husbandry- mainly cows but also sheep pigs and chickens. Over hundreds of years working in this environment they have created one of the most biodiverse areas of mountain hay meadows in the world with sometimes eighty species per square metre- awesome. Our hosts for the week were Sultan Sárig and his family.

It’s all for the cows

They get the hay to make milk

The house and small farmstead mainly produce vegetables and fodder for the cows which are mostly kept inside the cowshed and fed the hay through a window. Sometimes fresh green grass is added to the hay as this makes it tastier but also stretches out the hay rations. Made of wood the cowsheds are constructed so that everything is easy to manage- there is a gutter for the dung which can then be shovelled to a gap in the wall and then shovelled out onto the dung pile… very efficient, especially as one has to use muscle power, no fossil fuel guzzling machine here.

Found some deadfall traps in the cowshed; had no idea how they worked until Sultan showed me- quite difficult to set at first but, once armed, the mouse would have no chance should it stray onto the trigger. 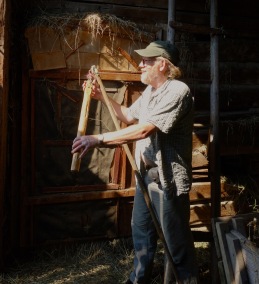 Even found a flail

The barn held quite a few intriguing items  not least an old flail for thrashing the small amounts of grain crops they grew. Odd thing was it was almost exactly the same design as we have at Home Farm. Then there was the cheese store above the barn door- apparently, once the new cheeses have matured inside, they are then brought outside and placed in a fly proof box. Cheese from the cows and sheep are one of the most important food staples for the people of the Gyimes valley, mind you smoked pig fat is a close second.

Our first day was taken up with scythe sharpening and setting up at Sultan’s father’s farmhouse. The snaths were straight and the blades came from Russia- a little rough but not that bad actually. 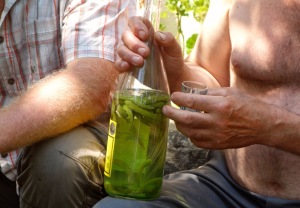 Palinka with spruce shoots in it 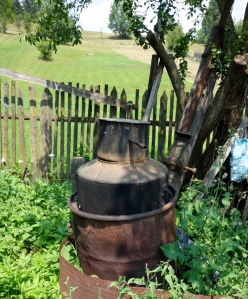 Once the job of sorting out the scythes was done Sultan’s father brought out a green liquor… looked  at it suspiciously until we realised that it was palinka flavoured with young spruce shoots and a little sugar. Having noted a still in the backyard I enquired as to where they got their liquor from. The response was sharp:”we make it!” “Ah, that’ll be what the still in the backyard is for then?” Of course it was, every family has their own copper still. Apparently the liquor is normally double distilled and the heads & tails (first and last bit that comes out of the still) are taken off to be used for external use only. The heart bit is the portion that can be drunk. 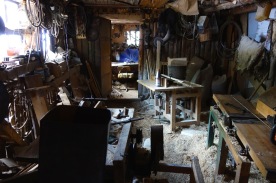 Boy, all the sheds had useful items in them… from some of the best woodworking benches I have ever seen to an archaic welder that looked… well I thought it was a bit of scrap metal! A quick visit to Uncle Viktor and his shed revealed some of the best handmade rakes I have ever seen. It takes Viktor about one day to make a rake but lately the much cheaper plastic rakes have been taking over from the traditionally made ones. Seemed wrong but what was worse was the fact that there are no new rake makers to take over from Viktor when he retires and, mind you, he is over 80 years old.

Later that evening we went up the hill to load a cart with hay so that it could be taken back down to the hay loft, a little time-consuming but enjoyable especially as we heard some corncrakes and occasionally were allowed some palinka. There is a real art to stacking the cart so that the hay did not all fall off as we went home… left that job to Sultan. 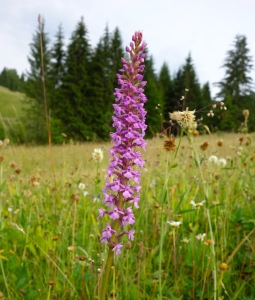 Each family only cuts what they can dry within a couple of days… then they cut some more so, as we loaded the cart, one could not help noticing the profusion of flowers, especially the orchids,  growing in the uncut areas.  An absolute delight to be able to wander through the uncut sections and so I took thousands of photos of the flowering plants… 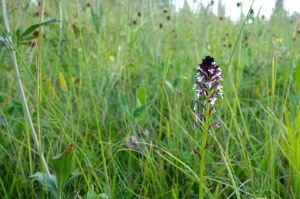 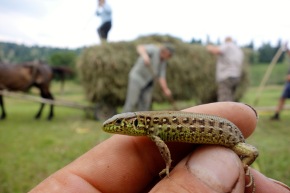 Also quite noticeable was the amount of insects including the crickets and grasshoppers. Then there were the lizards and slow worms which we found in profusion.

Once loaded up (and after another palinka) it was off to unload the hay in the hay loft above the cows.

1 Response to The homestead