Found this flower in the South Avenue for the first time (but it grows up at the Folly in great profusion). Tragopogon porrifolius is a plant cultivated for its ornamental flower, edible root and herbal properties. It also grows wild in many places and is one of the most widely known species of the salsify genus: Tragopogon. It is commonly known as purple or common salsify, oyster plant, vegetable oyster, Jerusalem star, goatsbeard or (simply) salsify. There is a yellow one which is much more common and goes by the name of ‘Jack-go-to-bed -at-noon’ which also shares the last three names. Here’s a bit from Wiki:

‘The root, and sometimes the young shoots, of T. porrifolius are used as a vegetable, and historically the plant was cultivated for that purpose; it is mentioned by classical authors such as Pliny the Elder. Cultivation in Europe began in the 16th century in France and Italy. In the United Kingdom it was initially grown for its flower and later became a mildly popular vegetable in the 18th century but then declined in popularity. Presently the root is cultivated and eaten most frequently in France, Germany, Italy and Russia. However in modern times it has tended to be replaced by Spanish salsify (Scorzonera hispanica) as a cultivated crop. Cultivated varieties include White French, Mammoth Sandwich Island, and Improved Mammoth Sandwich Island; they are generally characterised by larger or better-shaped roots. The root becomes discolored and spoils quickly if broken, which can easily happen since it is difficult to remove from the soil without damage. The root is noted for tasting of oysters, from which the plant derives its alternative name of oyster plant; young roots can be grated for use in salads, but older roots are better cooked, and they are usually used in soups or stews. It is recommended that when using the root that, if cut, its color be preserved in acidulated water, (Ed. what’s that?) A latex derived from the root can be used as a chewing gum.The flowering shoots can be used like asparagus. either raw or cooked, and the flowers can be added to salad, while the sprouted seeds can be used in salads or sandwiches.’

Old and even older!

An odd week what with the office work and ‘just-a-jobs’ that always take longer to do than the main jobs (which is why nobody likes to do them). “Just-a-gotta-do the fencing in the new woodyard”, but “just-a-gotta-do the chipping” first and “oh blast the blades have got dull” and “the damn drive belt’s broken again”… leading to another just-a-job to do… 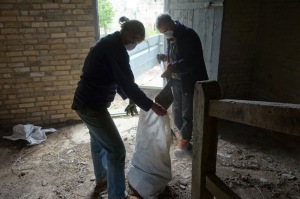 Cleaning out the Victorian stables by the Folly

Well, with a few hours left, was there time enough to just-a-do one more thing? Clean out the stables up at the Folly? The forestry team did a good job and cleaned out all the muck. Now the fox can see the rabbit so to speak. Seems someone (some time ago) put a layer of concrete over the cobbled floor… looks like we’ll have to chip that away. Then there is the slate roof to repair (a few broken tiles)… a cast iron window to replace… some elm woodwork to undertake to make a new hay manger; but the main job (which at present we can’t do) is to jack one corner of the stable up and replace the brickwork as there is some subsidence.

The Tuesday mowing group came up to the Folly to mow an area for camping at the end of June. Bit windy to say the least but what lovely grass and flowers to mow. 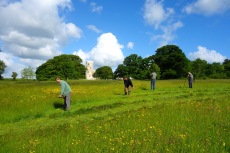 Shame nobody wants to come behind the mowers to dry the hay- one man (person to be more correct 🙂 ) can keep a lot of people busy preserving the grass for winter food (no, not for us- for the livestock silly!). Oh well that’s going to be another ‘just-a-job’… 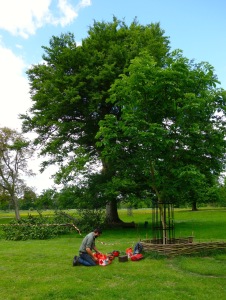 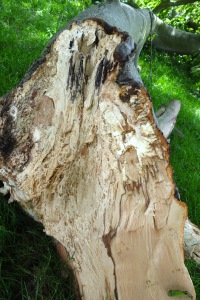 Short back and sides

Blast ! The high winds (over 40 mph but under 50 mph) caused a few tree limbs to fail. Normally the Park is closed if the winds exceed 50 mph but that’s during the winter when the trees are bare of leaves. However, with the leaves on, the sail effect is much greater so there is more chance of limb failure and this is what happened to a beech in front of the Hall. Although inspected from the ground we never saw the rot hole on top of the limb- this, along with the wind and a limb in full leaf, is what led to the tree shedding the limb.

Time for some drastic action, what to do? Fell the tree or reduce it? It’s quite a landmark and, after some careful consideration of safety and wildlife, I decided that the tree could be saved if we reduced the canopy by 30%. This we did and it still retains its majestic features; however, we will keep a watchful eye on this one… 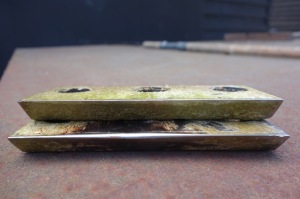 Unfortunately the drive belts for the chipper had not been delivered and we still had to sharpen the cutting blades. So, how on earth were we going to clear the ‘lop and top’ without it taking a whole day or more? Hmmmmmm! How about the timber trailer? We could stack the brash then use the grab to put it onto the trailer- that would save us some time and reduce the hard work a bit.

No chipper but we have a crane!

Oh yes, that worked a treat! While I spent the day in the office after reducing the beech tree (Tom’s turn to go up the next tree!), the forestry team managed to clear all the ‘lop and top’ and they put it under one of the mature beech trees in the Park. This will help the rarer deadwood insects and the cattle will also have a feast.

New/old lockers for the PPE and a wally

Friday and our new/old personal lockers came courtesy of Anthony’s  Furniture who deal with secondhand office furniture. Why pay over the odds for new furniture when you can get it at a fraction of the cost secondhand? Both staff and volunteers in the forestry team now have a locker each to store their PPE, ear muffs, helmets, gloves, overalls, rain jacket, proper dust masks, hi vis jackets etc. Tom decided to try it all on at once! 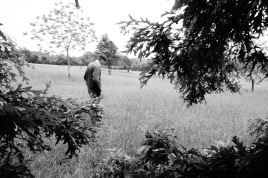 Have a little job for Andy Klose- must get the grinding wheel working in time for the Scythe Festival at Wimpole. I’m hopeful it will be up and running so bring along your English blades (and, come to think of it, your axes, billhooks and the like). 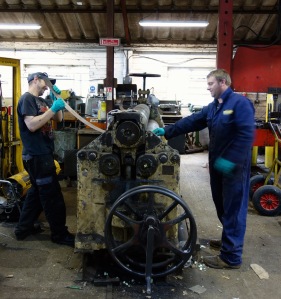 You may ask why "Sadeik" well it means friend in arabic. Worked in Jordan a lot doing tree surgery you see. I have worked in forestry since I left school with a two years in Telecom. Went back to forestry and tree surgery as it may not have paid as much but was far more interesting and dangerous. Spent a lot of years mountaineering, caving and canoeing too. At 29 I went to Bangor University to study Forestry and soil science then did an MSc in Water engineering all very interesting. By a quirk of fate in 1995 ended up helping sort out the woodland and park at Wimpole, funny thing was then I only intended to stay six months or so, but 18 years later I'm still here learning all the time. That's the best bit, if I wasn't able to learn something new every year I would not have stayed and as you get older you realise that the grass is not so green in the next field after all. In fact my patch is getting greener while much of the rest is getting browner.
View all posts by Sadeik →
Quote | This entry was posted in Uncategorized. Bookmark the permalink.