After an early, long, dry, sunny spring the weather has definitely broken into more typical English weather: sunny spells intermittently broken by squally showers or periods of prolonged rain. However, the visual effect on the landscape can be exceedingly dramatic. You just have to be there to see the changes. 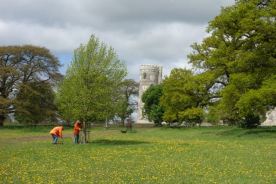 A short week (what with the bank holiday) and it was back to Folly Field to erect the new metal tree guards which are replacing the old wooden ones. It’s just so easy replacing guards with this new method (unlike the wooden ones which would have taken days instead of one day in total to do twenty seven of the trees). 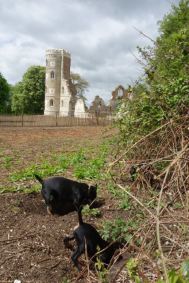 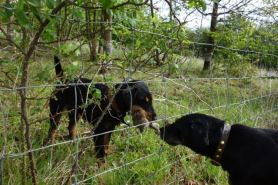 Meanwhile the dogs, including the young Rufus, were helping to keep the rabbits at bay. Unfortunately young Rufus has a bit to learn as a young  rabbit bolted out and past him as he was digging. One of the odd things about the rabbits is their habit of snipping the heads off the cowslips- in some areas they have decimated them. Never eating the flower head and stalk, they just leave hundreds of them strewn and wilting as they fall prey to those gnawing teeth.

On Tuesday evening the Wympole Green Wood workers came to Cobbs Wood to do some willow bark stripping. We picked a few stems that were nice and straight, felled them and then started to strip the bark off in one piece to make pots. It’s always good to have a sharp knife and Will had a rather good little knife sharpener with him – easy to carry in your pocket and even more easy to use. This one had a coarse steel and a fine ceramic pull through sharpener but it also had the same in round form, an excellent bit of kit with an even better price tag- under £10.

Some of the bark that did not make the grade for making pots was going to be used for making string and the willow wood could be used to make spoons or even a prototype dugout canoe on a small scale!!!!!

As you can see the round cylinders of bark can, with a little bit of ingenuity, be turned into a useful container ( perhaps a long quiver for arrows!). We’ll find out next month what people have made.

Cochlodina laminata or the plaited door snail can be found quite often in the woodlands at Wimpole; it’s usually a good sign of diverse woodland habitat and so is a rather local species restricted to chalky soils/geology. They climb trees and graze on algae. 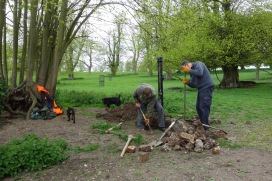 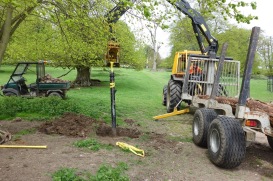 …with a little help

Next job was to extract the gate posts in the West Avenue. I guessed that they would have a hefty lump of concrete around them so brought the timber crane along to help. Surprise, surprise this job wasn’t going to be easy! Our first trial with the crane was fruitless so we dug around the posts to help clear some of the soil and, as it turned out, an awful lot of rubble.

After that the smaller posts came out without too much trouble and we broke the concrete up on these to free the metal posts. I have no idea why, on safety grounds, most axe and hammer tools have had the trusty ash handles replaced with fibreglass/resin ones. They are absolutely terrible at sending vibrations through your hands and arms. For my part I much prefer a wooden handle and, as long as the head is secure, they are far better to use. Needless to say all the smaller concrete and rubble was taken to Cobbs Wood Farm and put in the farm track.

Some were too big 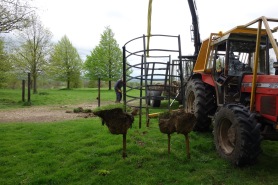 Away with the kissing gate

Some bits were too big though and it took a whole day to remove two sets of gates, a kissing gate and a few very old metal gateposts plus fill in the holes (which, I might add, were rather large).

Can you believe it, there was a pile of dog poo bags under one of the lime trees where we were working. I just don’t get the mentality of some dog owners and this seems to be a problem over the whole country and not just in National Trust properties. Obviously SOME dog owners think there’s a poo fairy that goes about after sunset to remove the offending items. For my part if it’s in the wider countryside it’s fine to ‘stick and flick’ and only bag the poo if in a public area, i.e. built up areas, playing fields, picnic areas and the like as there is usually a dog bin provided (free of charge too) and emptied regulary. Never a nice job picking up bags of poo strewn across the estate and festooned on trees, fences and bushes. 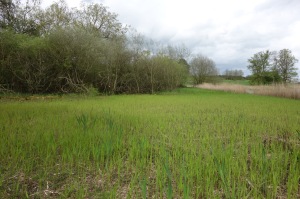 Renewed life at the reed bed

Took an evening walk to the Folly to see how the  wild flowers were getting on and decided to see how the reed bed was progressing too… very well indeed! The area is three times as big as it was before and the young reed is growing at a phenomenal rate. I’ll have another look in June and I guess the reed will be four to five foot tall by then.

Time to think about fencing one of the fields near Home Farm – it used to be an arable field but was sown with grass over ten years ago. First of all we needed some durable stakes … our stack of oak had quite a few old split and twisted trunks and these were definitely not fit for anything else (I can only sell them for fire wood) however they could be used to make some fencing stakes which are much more valuable.

Driving in the wedges

No good for planking

Not only that- because they are not treated -when the oak stakes fail they can be reused for firewood so I get the best of both worlds (save money on not buying stakes and then, at the end of their life, make some money by selling them for some rather superb dry firewood).

Six stakes from this piece

When we carted the fallen oak trees a few years ago the best timber was cut into various lengths depending on the straightness. All others were cut at either twelve foot (so we could get two lengths of six foot posts) or fourteen foot (which meant we could have a set of six foot posts and some gate/staining posts). We cleave the oak timber as it tends to last longer in the ground compared with sawn stakes and posts (plus, to my mind, I find it more pleasing to see). Usually we find an initial split (caused by natural shrinkage over a long time), place a steel wedge in and belt it with a sledgehammer. You need a few steel wedges to cleave the oak which can be easy if straight and clean but can be a lot harder with knotty timber. (Made over a hundred by the end of the week.) These cleft oak posts are six foot long and have a face roughly four to six inches wide; at this size that would cost us about £5 a stake and the eight foot posts over £10 each- quite a saving. 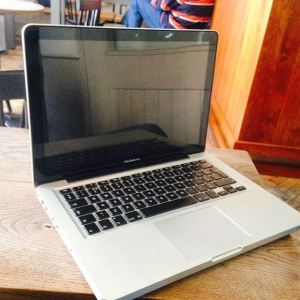 Disaster befell me- a bottle of beer managed to tip over and empty some of its contents on the keyboard of my Mac… with speedy action I thought I had saved it but… alas…the screen went dark and that’s how it has remained… everything else works… and it’s only four months old too, darn! That was an expensive beer! Trouble is, the Macs are so good at manipulating  images and editing videos for the blog, I can’t do without one as it saves a lot of time- oh how I wish there was some way to protect the keyboard. Had to buy another one- aaaaagggghhhhh and aaaaggghhhhh again!