Off to check out Cheffins agricultural auction near Ely, can’t afford one but had to gander at the motor bikes up for auction, the BSA was the star for me.  Here is a bit about it “1936 500cc BSA J12 and Swallow 9D sidecar ‘Uncle Jim’s J12’ Reg. No. CXP 101 Frame No. E12393 Engine No. E12446 An extremely rare machine indeed and believed to be one of only a dozen or so in roadworthy condition. The 500cc V twin from Birmingham must rank as one of the most aesthetically pleasing machines produced pre war and was only in production for 3 years. This London registered example CXP 101 has been in the same family ownership from new, Uncle Jim bought the outfit in 1936 and was the proud owner for the next three decades” Guess what it made! the figure is at the end of the blog.

This one was a 1909 Fowler 8NHP General Purpose Traction Engine, single cylinder, Two Speed Works No. 11983 In the late nineteenth and early part of the twentieth century, Fowlers had a very good export trade to Australia, particularly for their traction engines, which were found to be strong and durable in often difficult and harsh terrain. This imposing engine was exported to Australia in 1909 and spent all its working life there. The Fowler was repatriated in the 1990s and, in the current ownership has had a great deal of work carried out and according to the owners is now fully serviceable. It is fitted with a half cab, a good set of rubbers and finished in Fowler black. Estimate: £95,000 – £110,000, it was not sold.

One of the Traction steam engines

There were a few other steam engines and this 1907 Foden 7NHP Road Locomotive sold for £160,000, A Double Crank Compound, two speed, fully sprung with belly tanks. Works no. 1423 Foden no. 1423 was one of a batch of around ninety similar engines sent out to Melbourne, Australia in the early part of the 20th century through Foden’s agents Messrs Langwill Bros and Davies. These were generally 7 or 8 NHP heavy general purpose engines capable of a great variety of tasks such as winching, wood sawing, forest clearance, threshing, and haulage. With their high specification, they were the equivalent of the British termed road locomotives. Want one!

Inside the living van

Showmans living wagon of late 19th century style with Mollycroft type roof and decorative finish on leaf sprung axles and c/w rear storage box and access ladder, the original interior in unrestored condition. The interior was quite spacious and would make a nice home for someone. It fetched £3300. The Marshall 54′ wooden bodied threshing drum behind the living van had lovely on cast iron wheels and was in good original condition. I think it also had a straw comber on top, this fetched £2200.

What I had come for was the timber arch or jill, it was in quite good condition and I had thought I could afford about £750 but it went for £1450. These are very rare and you hardly ever see any for sale. However I did bid on a few blacksmith items, lost out on an anvil but did get a manual trip hammer for the forge as we don’t have electricity in the Victorian forge at Wimpole. This will be a very helpful item and we’ll be using it shortly.

This neatly brings me to the Blacksmith course I ran on Sunday, there were four participants which makes it a lot easier to run when there are equal numbers. The reason why is because I prefer people to work as pairs, in the old days you would have an apprentice to do the mundane work operating the bellows and striking as directed by the smith. It’s quite hard to do blacksmithing the traditional way on your own. 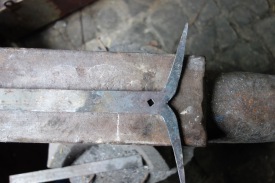 They make a ram’s head hook as this is a lovely project with all the basic skills, first they hot chisel the flat iron bar down the centre for about three inches then the two split pieces are turned to a right angle and tapered. These will make the horns, then the bar is hot punched for a fixing nail or screw to go through. 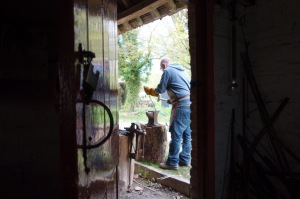 Because the main forge area is quite small I also use a portable forge (acquired at a previous Cheffins auction) to teach people, it’s an excellent way to show how easy it is to forge at home once you have the basic equipment, which is a forge and anvil plus tools.

Once the hole is punched then the bar is cut on the splitting hardie and after that the hook section is thinned and tapered, the horns turned into a semi-circle and the hook section turned. Sounds simple but is in actual fact quite hard to master but everyone did exceptionally well and finished in good time. 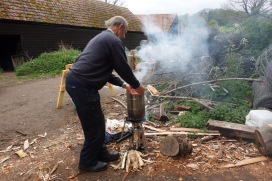 As I did the forging on Sunday I missed the bodging day but put my elm twine in to be judged and my willow twine which incidentally is much better. Only two of us managed to bring along some twine/string (shame on the rest of you) Kate won as the willow was not allowed to be entered as APPARENTLY I said it was for elm only, I think it twas true, darn. 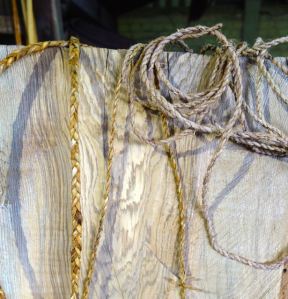 The elm was not so strong and would snap quite easily so I  did a bit of plaiting which was stronger but much stiffer. Fed up with the elm I then tried willow bark which is best boiled, wow that’s darn good stuff, easier to work and much stronger and much more supple.

And a steam roller pasted by!

Had a nice surprise while forging, John Reid brought his steam roller up to the smithy for a trial run before the May bank holiday run to Great Chisel. 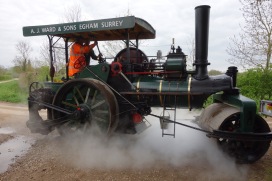 She stopped by the forge 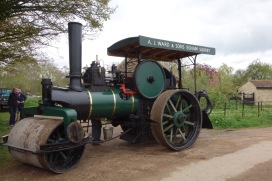 And that’s where it all went wrong

This is a Clayton & Shuttleworth steam roller that was made in 1902 I think.

Pressure was good but there was definitely something wrong

The steam roller team wanted a poker for the fire-box and after scratching around in the forge I found a suitable half-inch round rod, didn’t take long before the poker was made although we still have to put a handle on it.

But I did make a poker for the fire box

While pondering the problem it was time for lunch

Having made the poker it was time for the steam roller team to go, but what was this! something was amiss, there was no neutral and it was a struggle to move the levers. Oh no the steam roller could be made to move but stopping it was not possible. With a full head of steam it was too dangerous to move the engine but by letting the pressure go it was possible to move the old girl down to the woodyard where it was going to say for a few days while john and co worked out what the problem was. Time for some bacon though, handy having a shovel and firebox.

As it turned out the sort of head gasket had failed allowing steam to transfer between the two cylinders. This would need a good cleaning job and a new gasket.

Parked up in the Woodyard waiting to be fixed

With that job done it was time to take her home to Orwell. 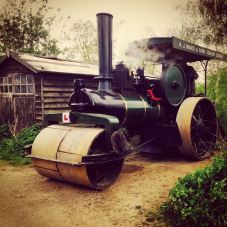 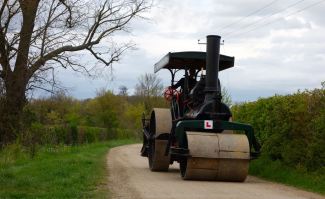 5 Responses to Full steam ahead