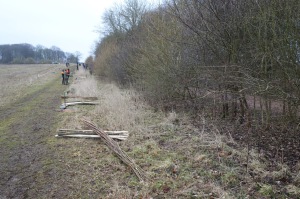 Not a huge hedge but one where no chainsaws were allowed

The Woodland Trust’s Heartwood Forest is one of the biggest new native woodland plantings in England. At 858 acres (or thereabouts) it is one of their biggest challenges yet:

Located near Sandridge, just three miles north of St Albans in Hertfordshire, it’s a once-in-a-lifetime opportunity to transform the site into the largest new continuous native forest in England. The site contains four small remnants (44 acres) of precious ancient woodland, our equivalent of the rainforest, which now sadly makes up only two per cent of UK landcover. Incredibly, it takes just 12 years to turn bare land into flourishing native woodland complete with a diverse range of wildlife and towering trees. So why am I mentioning it? Well, they had invited many of the South of England style hedge layers to enter into their first hedge laying competition on the 28th of February. Both Jim (he went for the veteran group) and I (had to go into the open class) entered. 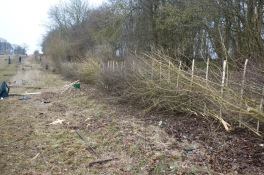 Halfway through the competition and my section was all pleached 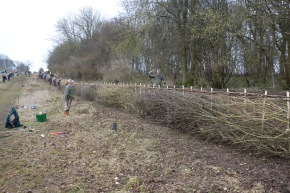 Everyone had to do the South of England style and there were three classes: veteran, open and novice. We all had to use hand tools which consisted mostly of billhooks, axes and saws. A prompt start at 9am on a dull and windy day soon had the brash piling up. We had until 2pm to finish our cant or section and, for my part, it was all going well. I think there were nearly 30 competitors which was excellent. 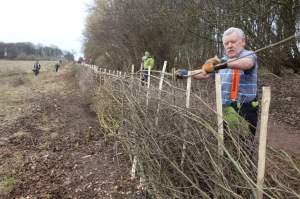 By 2pm most people had finished and it was time for the judges to work out who had won in each class. A difficult job and one that can take a long time to do. 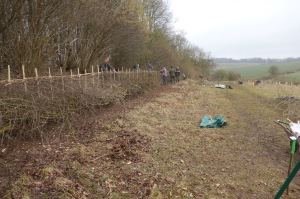 Looking down the line at the other competitors. 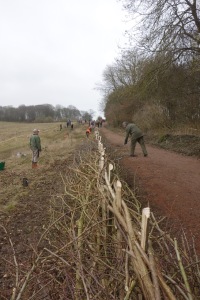 Not quite so straight on my section!

As usual there is always a quick flurry of work at the end to make each individual’s section look its smartest. All the extra little details could mean the difference between winning or losing and nobody likes to lose! 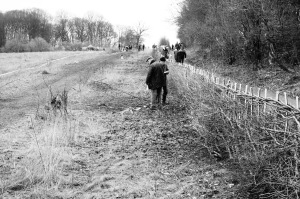 The judges hard at work 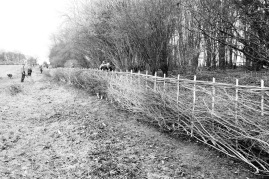 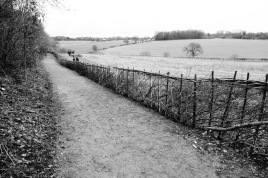 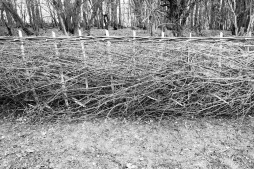 My hedge: a nice brash skirt, evenly spaced stakes and good bindings… but was it good enough? 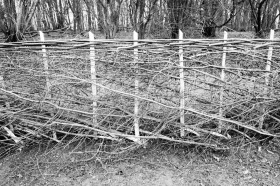 Who was going to win? As it turned out I had a reasonable chance of winning (wow!)… so how do they judge it? The pleaching (the cut diagonals) has a total of 20 points available and are judged  for the hinges, heels and height, plus how the pleaches are cut. Then there is the build- the hedge has to have a flowing skirt of branches that look neat and nicely cut, it has to be stock proof and the stools covered (a total of 25 points are available here). 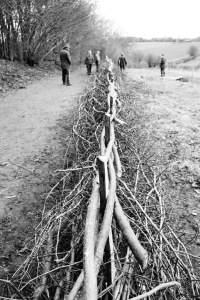 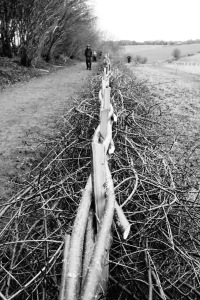 Then there are the stakes (here we have 15 points available): are the stakes in the centre of the hedge, equally spaced, vertical, well driven in and firm and finally nicely cut above the bindings? Then there are the bindings themselves (another 15 points are available here too): they have to be four foot high, in a straight line, level with stubs cut clean and the cant ends secure. 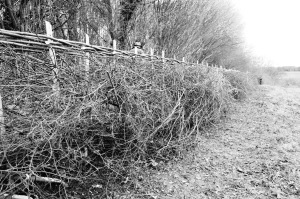 Finally there is the general appearance- here the judges look at the trimming and tucking in, clean base and true to style. Also there is the site management (cut brash should be neatly stacked to aid the clear up) and also there is the judge’s ‘gut feeling’ for the hedge ( a total of 20 points are available here). So, did I win the open? No I didn’t…darn I came second, what could I have spent a bit more time on I wonder? Still, that’s not bad and there was the bonus of £25 for coming second… right, down the pub we go!

I was so engrossed in my hedge I forgot to take some photos of Jim’s hedge; alas, he did not get into the top three in the veteran class ( there were some very experienced hands in this class). Next time Jim it’ll be your round. 😉