Wimpole’s hedge laying competition was held last weekend and we had nearly twenty competitors- some cut as pairs, others on their own. The hedge chosen was in the same place as last year’s competition. Who was going to win in each of the two classes? Was last year’s champion in the South of England style (Tim Radford) going to be unseated? And, with the stiff competition, who would I put a bet on?

Each cutter or pair had a cant of eight yards long (I do a wee bit less than the normal ten yards so as to make sure everyone finishes in time for lunch). The idea is to trim and lay the uprights and then stake and bind. There were two styles: South of England and Midland- one is for sheep grazing both sides of the hedge and the other for cattle grazing only one side of the hedge (the other side being under arable cultivation).

The day proved to be nice and dry and not too cold either, which is quite unusual for the Wimpole competition. Usually we either have freezing cold weather or howling gales so a nice and pleasant surprise for once. The day went well with everyone finishing by 2pm although the early frost which had allowed easy access to this part of the estate had thawed out and some of the cutters had a little bit of trouble getting their vehicles off the fields.

Back down at Home Farm we made our way to the Farm Restaurant for a late lunch. The catering staff had cooked a lovely meal of Home Farm organic sausages and mash and of course a beer to  quench the thirst. So, who won? Well, in the South of England group: Dean Dyer came third, Tony Gallow came second and, it galls me to say it,  Tim Radford came first. Special mention has to be made of Tim’s binding which was superb, and the reason why he ended up the clear winner, although he didn’t use an axe to finish off the cut stools which the other two had done… watch out Mr Radford!  God I hope someone beats him next year, his head will just get bigger! 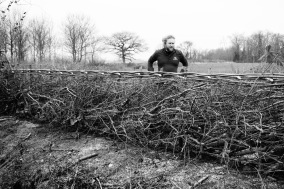 First in the South of England style

First in the Midland style

In the Midland style third place went to Tony Wilsher (but he a difficult section of hedge with too much field maple), second place went to Alan Musk and, by just a squeak, Graeme Teece came first. A special mention must go to Paul Martin who works as the Forest Ranger on the Wimpole Estate- he did exceedingly well in the South of England style.

Jake and Will did not do so well however- their excuse? A hangover from the day before celebrating England’s win over Wales. Hard luck boys, better work harder next year! Meanwhile Cory spent most of the day trying to dig a rabbit out of a small warren; worn out and rabbitless he returned home covered in mud. Well done everyone, it’s getting quite difficult to judge the groups now, wonder how skilled the cutters will be in next year’s competition?

Clearing up the black plastic

The very next day (Sunday) we had the CNTV in to clear up and chip the brash arising from the hedge. Another glorious day with splendid views across the Rhee valley. Chipped up all the brash in the ditch and some on the other side. We also picked up all the old black plastic that was used to help the hedge grow when it was first planted. Some people like to use black plastic rolls which they lay and peg to the ground and then plant the hedge plants through it. It’s a way of controlling weeds in the early life of the hedge but does look very untidy once the hedge has grown.

The two styles of hedge have very different bindings and I just had to put on the photo of Tim Radford’s binding as it was the straightest I have ever seen. 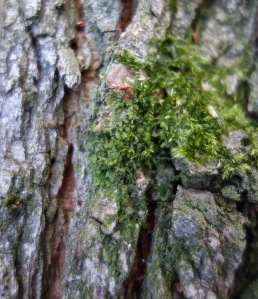 Monday and back to work in the elm coppice. As we worked through the thirty year old elm I was quite pleased to find quite a few epiphytic bryophytes (mosses) and liverworts. They are interesting as they give an indication as to how healthy the air is around the habitat of Wimpole Estate. Other than that I don’t think they have any commercial value so to speak but they do make my work far more interesting. Here is a bit from Wiki on this genus.

Metzgeria is a genus of thalloid liverworts in the family Metzgeriaceae. The genus was named in honor of Johann Metzger (1771–1844), German copper engraver and art restorer from Staufen, Breisgau (Baden-Wurttemberg), a friend of Raddi and pupil of the great Florentine engraver Raphael Sanzio Morghen (1753–1833). Approximately 120 to 200 species of Metzgeria have been described. Species may be either monoicous or idiocies.

We have two species at Wimpole but here is some info on the Forked veilwort. 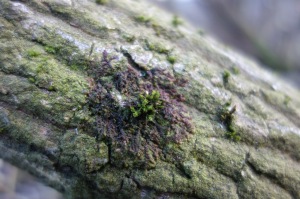 There was another moss that, for a long time, was very uncommon on the Wimpole Estate but I now find it in most of the woodlands (just goes to show you how much cleaner the air is now). This one is Cryphaea heteromalla or Lateral cryphaea, this is the link to the ecology and identification of this species: Lateral cryphaea. 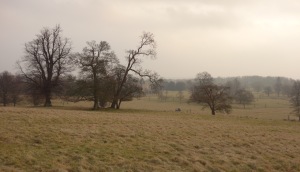 Was it going to rain?

Next job on the list? Taking down the park rail fence but then the trees arrived from Kingsdown Nursery so time to beat up the fatalities from last year. Beating up is a term for replanting those trees we lost, not sure where it came from or what it actually means but there you are, the English language. 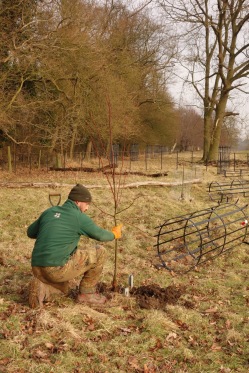 Don’t beat yourself up about the loss!

This year it was nice and dry, so to speak.

Last year was exceedingly wet and we had to plant trees into, well, buckets of water. No wonder we lost quite a few, but there you go it couldn’t be helped. However this year, even though people think it’s been wet, it hasn’t! It’s been quite dry which has helped us in planting the trees- no sodden soil and no gloopy mud. Fingers crossed that these beaten up trees will survive. 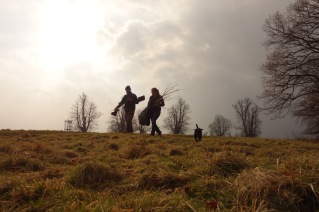 Nearly done in the deer park

The damned GPS system went astray- I sent the team to plant the One and a Half Avenue last month and assumed the posts had been placed accurately but it would appear that I was wrong! Looking down the straight line of guards of replanted lime from last year I realised that a few of the newly planted trees this year were out of line. Ohhhhh blast and loads of other words! We’re going to have to dig up the offending trees and guards and reposition them. That’s a load of extra work we really didn’t need.

Time to sort out the South Avenue… quite a few years ago we laid the hedges (two kilometres) so that the lime trees could grow unhindered. Unfortunately the hedges and scrub have quietly been growing and spreading again. War has been declared and the line has to be redrawn and who better to help than Agriplant Ltd.? They have some excellent machinery way beyond the paltry budget of a forester.

Now you see it… 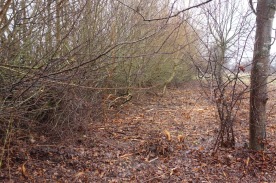 First to enter the combat zone was the scrub basher- the machine alone without the tractor is about £12,000-£15,000 and the tractor will be around £50,000. In one day Paul from Agriplant managed to knock back two kilometres of scrub- that would have taken us a week to cut and chip!!!

Meanwhile Karl was siding the inner hedges and tidying up- this is an awkward job as you have to keep moving the flail arm in and out to avoid the lime trees. A painfully long job and one we had to go back over to cut out the big regrowth elm that hindered the flail head. This is definitely going to be a big job but one I hope we can finish next week as we still have to cut the other side of the hedge and then cut the tops. Now that we have sorted out the scrub we can think how best to proceed with these very large hedges…