Only a few places left on the estate where there are still quite a few rabbits around; one of those places is Valley Farm but even there they are only in patches. We did have a scout around a few weeks ago with the lamp to see where they were and decided it could be worth long netting, so this week we elected to use 600m of net to try to catch Mr Rabbit and his muckers along the beech belt. Hmmmm… it wasn’t the night for catching ’em- only managed to nab three (that’s one for every 200m of net set, certainly a lot of effort for small reward). 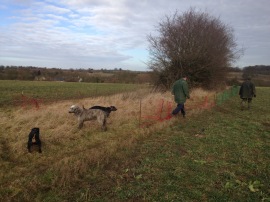 Well, best get on and ferret the little blighters out of their warrens… started on the warrens (which usually have zillions in them) by the elm hedge we felled – one rabbit and that one escaped, darn! We weren’t having much luck so we went into the woodland where progress was slow. Worst of all the rabbits have started to breed already and that makes it very difficult as the ferrets will lie up after killing the young rabbits and you have to resort to digging. The old saying used to be ‘ferreting in every month with an R in it’. Well, global warming has done for that (apparently the old boys used to go right up to April!).

Total for the day? A paltry seven rabbits, didn’t even make double figures and yet, when we are out lamping, they are all over the fields at Valley Farm.

The last of the tree guards arrived

Funny old week- work came in dribs and drabs and it wasn’t easy to really get stuck in. Started felling along the A1198 on Monday as some of the trees were in poor health plus we fell about a third of a hectare each year and plant up. No sooner had we started than a call came through to sort out the second (and last) consignment of metal tree guards for this year’s parkland planting.

Decided to split the forestry team up: those to continue felling along the A1198 and those to unwrap and place the guards out as well as erect them. By the end of the week all we had left to do were twenty eight lime trees in the one and a half avenue.

Nasty old place to work (alongside the A1198) and not very nice trees to fell- both horse chestnut and sycamore have very brittle wood so, when you fell them, they tend to fall in the direction of the lean and, guess what? About half are leaning towards the road. 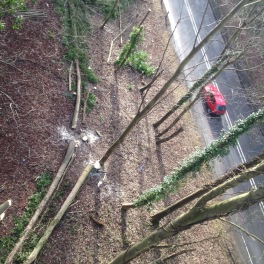 A little bit of tree surgery was required

Dragging the brash into the wood

First we felled the easy trees including the leaning ash and elm as these have very strong wood that enables you to turn the tree away from the lean. Then we tackled the trees that required some simple tree surgery which meant that we cleared a big open area to then fell some others and all the brash was dragged into the wood so that when we finish felling we can replant the coupe.

Away with the firewood 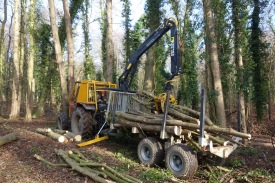 It also helps to take the felled wood away so that the area is kept clean; the first lot of wood to be taken away was the rougher firewood otherwise it would more than likely have disappeared into someone’s car boot over the weekend as it was so close to the road. 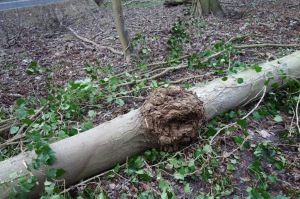 Fault in the trunk

The better lengths of timber (mostly sycamore as horse chestnut is worthless) were sawn into appropriate lengths and winched out of the way ready to be loaded up.

Always nice to teach someone a new skill and it was Shane that had a go at chokering up the timber and then operating the Igland winch that we fitted to the old Ford 5000. She just about managed to pull the larger trunks with the diff lock on and in low gear. Winching can be a dangerous job if you don’t have your wits about you; one very good feature to the Igland winch is the long cord that allows you to operate the winch from a safe distance (mind you, modern, up-to-date equipment tends to be wireless operated). 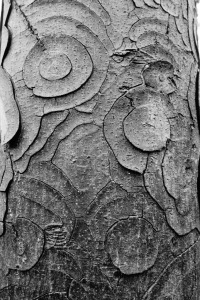 So what use is horse chestnut? It can be used for veneer, furniture, plywood, interior trim and turned objects but is rather poor and not really used that much. The  most famous use of horse chestnut is in the game of conkers. The first record of the game is from the Isle of Wight in 1848.

Horse chestnut timber is a pale, creamy white to light brown with a smooth, soft, fine texture. It’s not very strong and is therefore not used commercially, but its soft texture makes it ideal for carving. Other uses for the conkers include horse medicines, as additives in shampoos and as a starch substitute. Chemicals extracted from conkers can be used to treat strains and bruises.

Back to the timber yard to unload

Back to Cobbs Wood Farm to build a stack of wood; over the coming months this stack will get really large and I may have to resort to selling it as firewood logs in nets as we are unlikely to have a biofuel boiler at Wimpole in the near future.

Bit of a braw day 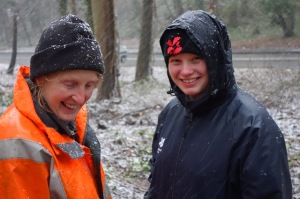 Well, winter has come and damned cold it is! The wind was biting during the week but that gave way to an afternoon of snow with exceedingly large snowflakes. Trouble was it had warmed up enough to make it snow of the most horrid type- cold, wet and miserable- although there were still some happy faces.

Darkness fell quite quickly and we were glad to be going home to dry our sodden clothes. 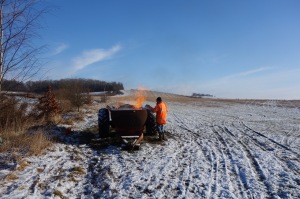 Friday and the snow had frozen in the night but alas, the ground had not, best keep off the land with the bigger vehicles and do a bit of burning to warm up in the early morning chill.

So what to do? Erect the last of the metal tree guards (cold weather and bolts/nuts don’t seem to work well together) or strip out the metal park rail fence in the West Avenue? Easy choice!

Oh, only some of us are working!

Overseeing the work are we?

Now for some good news… or not, depending on how you look at it. Missie the Jagdterrier and her partner Cory got up to no good 62 days ago and, early on Friday morning, she gave birth to seven little Jagdterriers, most of which were mini Corys and only one mini Missie. It’s astonishing how quickly they grow- within a day there was a marked difference and, after three days, they had doubled in size. Because they are working dogs and get into all sorts of scrapes I will have their tails docked- this is allowable for true working dogs and you have to prove that they are from working stock and will be used as such. Also you have to take in a shotgun licence or they cannot be docked. Taking a small amount off the tail stops it from being ripped to bits when they go through bramble and thorn bushes. You can only have them docked between one to four days old, after that you can’t.