All a rush and too much to do!

It’s getting to that time of year when the forestry and estate work gets into full swing: hedge laying, parkland tree planting, tree surgery, coppicing and thinning the woods alongside the general work of keeping the Estate ticking over.

Our first batch of tree guards

Organising these tasks can get a bit fraught as you have to apply a bit of guesswork as to the timing. We have already done quite a bit of the Higher Level Stewardship (HLS) hedge laying (so that’s sort of out-of-the-way for this year) but the HLS tree parkland planting is only just beginning. First of all the spots where the trees have to be planted are located and marked  and Branwell came to the rescue here with his new fangled electronics. Yet again we are told by the makers that you can get sub-meter accuracy but, alas, that’s not true. Having marked out the avenues it was apparent that, yet again, the new fangled electronic thingy was somewhat amiss (only by a few metres or so ‘tho).

Out with the metal stakes too

Andy Klose Engineering makes the metal tree guards ( galvanised and powder coated in black). This year it was decided to put the guards in stillage to protect them on their journey from AKE to the galvanisers and then to the powder coaters and back again. This worked extremely well (especially as Albert and the teleporter from the Farm could easily move the guards on and off the tractor-trailer.) These guards were then taken into the Park and placed by the marked spots for the trees as the ground was getting quite wet (but not as wet as it was last year. In fact I have asked to get the tree planting done before Christmas as last year we had to do it after and suffered from the appalling wet weather). Last year we had to walk the guards up to 500m away from the road whereas this year being able to drive the tractor and trailer over the ground saved days of hard graft. Once the first 98 guards were out we then put all the galvanised legs out too. Altogether there are 162 trees to plant this year.

As we worked around the Park in the Ladies Field section we did occasionally come across mushrooms. Some easily identifiable as edible but others not so. One such fungus was growing on some old stumps in great big troops. Interestingly these were oak stumps which have very acidic wood which allows some of the more uncommon, acid loving mosses to flourish; the predominant one you see in the photo is Campylopus introflexus . God knows what the first name’s for but the last is reasonably obvious as the long white hairs in each moss leaf bend at acute angles when wet (or was it dry?).

Field mushrooms have been slow to appear and so have many others but, as the cold weather has replaced the rather warm autumn weather, so more of the fungi are beginning to show themselves. Wood blewits with their purple attire are busting through the leaf mould and the blue legs (Field blewits) are turning up everywhere. Then, as we passed one of the horse chestnut trees, we found hundreds of velvet shank- very tasty but, alarmingly, there was also quite a bit of honey fungus- edible and good but not good for the tree. I suspect that this tree, even though we did reduce it, will succumb and die within the next few years. Well, a day or two later, my father informed us of a gathering of oyster mushrooms in the woods, these are not to be missed so, during lunch, I paid a visit and found supper! 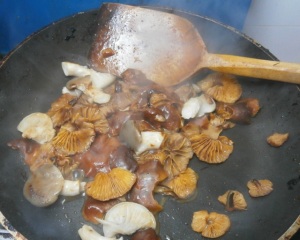 One of the other jobs we have been doing is providing some indoor decorations for the Winter Festival at Wimpole. First on the list were the christmas trees- these we obtained from the Folly area as quite a few of the conifer trees will have to be felled in the new year (so felling some now saved quite a bit of money that would have had to be spent on buying in Christmas trees). However, they were pine trees: Scots and Corsican -different from Norway spruce and Normandiiana firs as they are lighter in structure and appear more delicate. Got some really big ones for the Hall! Then there were the elm stumps and tops along with numerous other items from the woods. 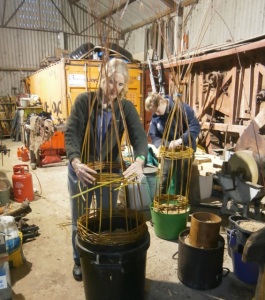 Now, having taken the idea of making reindeer from a friend, I Googled how to make them on the web ( and, as I was Googling the web at work, Jayne looked over my shoulder and got the germ of an idea too). Sometime later Jayne had worked out how to make a willow angel. We have a willow bed so raided it and, two hours later, Sarah and Jayne had produced two angels for the Hall. The next week (and at Olga’s request), Jayne and Shane made another two for the Chapel in the Hall. The Winter Festival in the Hall was beginning to take shape…

Looking back to Cobbs Wood Farm from Rectory Farm.

Another job we had to do over the last week or two was to deliver about fifteen tonnes of wood for the Pleasure Gardens. This was going to be cut into four-foot lengths; then there were another five or so tonnes to drop off in the West Gardens. What are the gardeners up to? They even want 800 willow rods and a great big twisted branch. I’ll have to sneak around the gardens early one morning to see what’s going on!!!!!

As we are now planting trees to replace those that have been lost over the last 150 years, as well as those that are beginning to fail, I will point you to the page with all the information about this year’s planting: here. If you look through the page and find areas 2b, 4a and 4b you will find all the information you need to know about how we sorted out where to plant and what species. Some trees have been replaced by London plane and native black poplar however, as the ground in places has been too wet for any other tree (except for willow and alder which we are not planting).