Moss, liverworts and a carr

On the 15th of November the bryophyte group visited Wimpole; I have not been out with them for some years so it was a welcome break to meet some old friends and brush up on my mosses and liverworts… wow, rusty or what?! Why do they change the latin names so often and why do I forget so easily? Jonathan Shanklin also recorded some of the higher plants, including these ferns and a club moss found around the Hall, while Nick Jardine recorded some of the more unusual fungi. Below is a report by Chris Preston on the Cambridgeshire Bryophyte group’s visit: 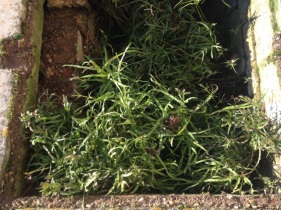 Cambridgeshire Bryophyte group 15 November 2014 Wimpole Estate Present: Mick Burton, Simon Damant, Ralph Ecclestone (am), Mark Hill, Steve Hartley, Jean Hewitt (am), Nick Jardine, Chris Preston, David Seilly (pm), Jon Shanklin. Although Harold Whitehouse visited the Wimpole Estate in 1960, it was not until 1998 that the Group began to visit it regularly. Since then it has proved to be a rich site and there were 106 bryophyte species on the Wimpole list at the start of our visit. As usual, our guide was Simon Damant, who has been chiefly responsible for establishing the importance of the Estate for wildlife. We started with the churchyard, where we found 29 species. Grimmia dissimulata, first found in 2003, was seen in good quantity on the north wall of the churchyard and on a sloping buttress at the east end, with smaller patches on two gravestones. 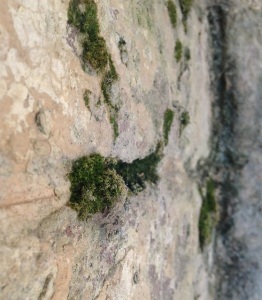 Leptobryum pyriforme, found by Nick on soil at the foot of the north wall of the church, and Rhynchostegiella tenella, found by Simon on an oolite gravestone, were new to the Wimpole list. Marchantia polymorpha, seen by Jon, was also new, though it grew just outside the churchyard. We then went on to have a good look at the walls of the Hall, including the covered culverts around the base into which Simon descended to search the shaded stonework. Didymodon umbrosus, seen in 2003, was refound on shaded brickwork below the main entrance steps on the south side of the Hall, and in a stone in the culvert on the north side. Oxyrrhynchium pumilum was frequent on some of these very shaded stones. Two species growing on the north side of the Hall were new to the Wimpole list, Hygrohypnum luridum (one circular patch found by Simon on a flat stone ledge) and Pseudocrossidium revolutum. We paid our respects to Leucodon sciuroides on the shaded side of the Wimpole Stone.

We walked through the garden to have lunch at Home Farm. After this we made our way to the outflow stream of the lake and spent most of the afternoon recording along the stream and then in wet woodland near the lake. Anomodon viticulosus, Cirriphyllum crassinervium and Porella platyphylla were seen on exposed tree roots by the stream. Only two species were added to the Wimpole list, Oxyrrhynchium speciosum (found by Mark in wet woodland by the lake) and Syntrichia virescens, but there were several other uncommon species in this woodland, such as Brachythecium rivulare, Isothecium myosuroides, Mnium hornum and Rhizomnium punctatum. Though we saw a good range of commoner epiphytes, it was disappointing not to find any of the less common Orthotrichum species. Finally, we went to the walled garden, a site we had not previously visited. Didymodon umbrosus was seen again and in much greater quantity, growing as dark green patches at the bottom of the brick wall of an outbuilding, and Leptobryum pyriforme in a roofless greenhouse, but the highlight of the walled garden was a 30 m long colony of Leucodon on the top of the outer wall. On the shaded outer side of the wall there were large patches of Porella platyphylla. Both these species are ‘old countryside’ species, being slow to colonise new substrates.

In conditions which were ideal for bryology, as it had rained the previous day, we found an excellent total of 77 species, including 70 seen previously on the Estate and 7 additions.  Warm thanks to Simon for his expert and most enthusiastic guidance. Chris Preston 22.11.2014

One wanders in the wood

Below are some of the finds from the wet woodland just above the top lake: 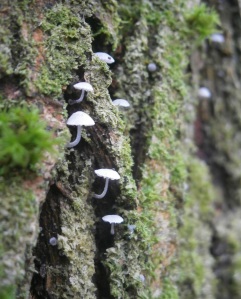 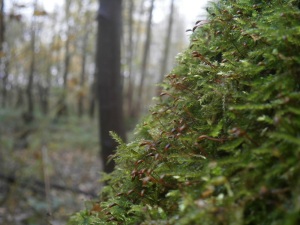 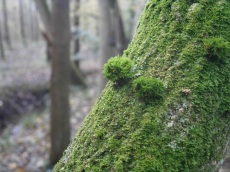 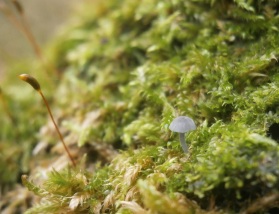 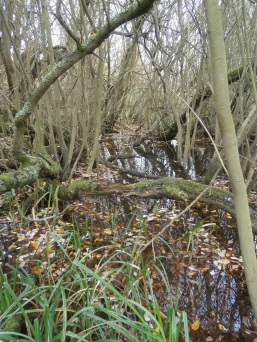 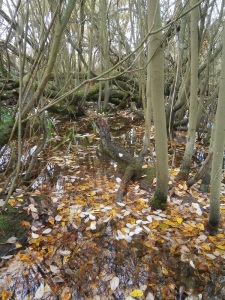 The  Wimpole Christmas Craft Fair was held over the weekend of November 15th/16th and, as usual, we came down to add to the working crafts display- there were quite a few Wympole Green Woodworkers and a blacksmith or two as well. 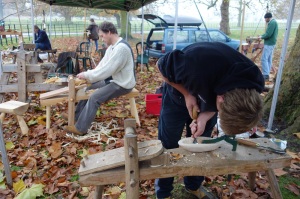 So what were people making? Quite a few bowls actually and there were some novel devices to hold the bowls down while using some bowl gouges from Nic Westerman. You can check out his blog here: ‘Nic Westerman’ . He has some interesting tools including bowl carving adzes and axes. Maybe I will have a bowl competition in the new year with the emphasis on bigger is better!!!!!

John Warrick was also busy carving out bowls over the two days. He managed to carve one hornbeam and one plum bowl.  However, tea time was fast approaching and Shane decided to use the ‘rocket stove log’ by putting a metal rocket stove (which has a water jacket) on top of the rocket log… we soon had enough hot water for tea. 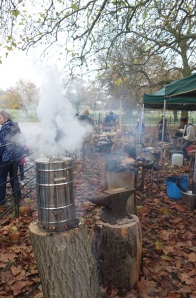 The only problem was with the wood smoke- funny how it always follows you about, making your eyes water. Some modifications were needed and that’s where Magnus came to help; it wasn’t long until he had made three spikes!

Some of the years WGW green wood competition entries from 2014

Over the two -day event most of the Wympole Green Woodworkers brought in their wooden items they had made over the previous year (as well as some extra projects). It’s amazing what a monthly competition can do and what people can make from what most would consider firewood.

November’s one piece of treen competition

So, we come to November’s competition: it was just ‘a piece of treen’ but, what a surprise, a very wide range of items were produced. One has to say that, from a bloke’s point of view, Tony’s plane was pretty awesome AND he had even made the blade AND had etched his name into it- what a swot!!!! Shane’s snake made an appearance…and then slid off somewhere. There were a few spoons, a carved cup and a turned wine vessel made from plum wood (it had beautiful streaks of red in the wood too) and then there was David’s bowl with legs (my favourite). But, alas, it did not win as the two judges this month were Rosie and Victoria who work on the Estate. They chose Andy Marczweski’s carved cup as, for them, it would be both beautiful and useful. Sorry Tony, they didn’t know what your plane was for, let alone how they could use it in the kitchen… 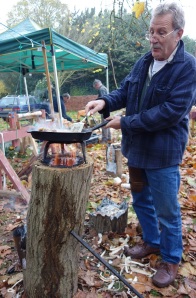 Under the expert eye of the WGW chef

Well, Magnus’s spikes worked well with the rocket log and, as you can see, the air goes into the lower opening while the exhaust comes out from the top. I used the big Husky to bore the holes about three inches apart. It takes a little time to get the fire going on its own but, after thirty minutes, you can boil tea. As the day wore on however, the log stove became more and more fierce- John’s lunch was cooked in minutes. So, Saturday went well but, alas, the weather on Sunday looked like it would rain…

And then it rained…

…and the people fled

…and then the heavens opened. We had loads of people watching us working on the shave horses and pole lathes as well as the forge, but the rain came down so hard they all ran for shelter and so did we!!! One advantage of the marquees was all the rain that poured off the canopies- enough to fill the kettle and boil some more water for tea. 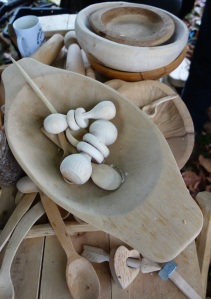 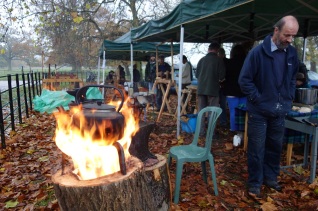 Only problem with a rocket log is that it eventually burns itself out… but not before it has one final flare up with a chance to make some more tea.

What have they been up to?

By the time the day drew to an end the rocket log had finally disintegrated but it was soon put on the forge to make a fire so we could keep warm as the night closed in. A very enjoyable weekend for us and, we hope, the public enjoyed the working rural crafts too. Meanwhile, on Sunday, John the ‘Engineer Ranger’ and his son Alex had been working on their steam roller- it had been fired up to full steam but, as winter is fast approaching (or not- as it’s so warm), it then had to have the water drained out and be cleaned (a very dirty job and I suspect it was Alex that ventured into the boiler!). Hopefully we will see the steam roller at the Scything Fair… if not sooner. 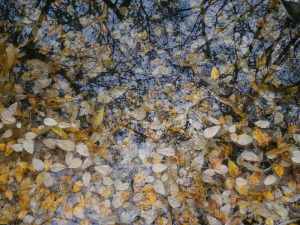