The last weeks Wympole’s green woodworking group was held at the farm again, this time Shane and Jayne decided to attend so he has written a little blog for you below. 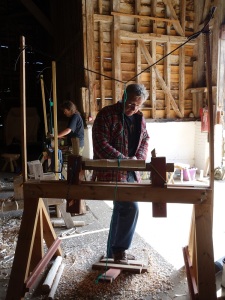 A most natural bodger in the modern sense

There are those around me who would say I am a natural bodger (Eds note: I can vouch that he really does bodge things up) and with my usual politeness I would not disagree with my peers. Bodging may now be art of putting together items in a rough makeshift manner but is in fact an even older craft. It is a skill whereby a roving craftsman, using only rudimentary tools, fashions items from wood. The wood is usually newly hewn and given the nominal status of ‘green’. We have all purchased wood from the local hardware store that is machined and manicured to build shelves etc. Why would any sane human want to start spending effort on preparing wood even before starting a job when you can buy those lovely plastic shrink wrapped battens from B&Q (other stores also sell this pap). Life has become a series of trips to convenience stores and that’s not to say that Tesco’s (ditto comment as before) don’t provide a great service and price but have you ever tried to grow your own veggies?

Have you ever watched over newly planted potato’s for the first green shoots to emerge? Have you anguished as tender runner bean flowers appear? And after the culmination of these efforts, picked, prepared and cooked the vegetables, so carefully nurtured. New potato’s and freshly picked runners with a little butter melted over them. Ooooh, I’m salivating now. If your answer is no, then bodging may not be for you, but if the thought of those fresh vegetables did set your taste bud slavering then maybe you should also try bodging.

Bodging down on the farm

If perhaps I haven’t made out a good case for the craft then I will leave that to others as my intention is to describe my experience. If maybe you would like to try bodging, then best starting place is your local group, which is where I ended up on a Sunday morning in late August.

Already familiar with the rudiments of the skills needed from my work on the Wimpole estate, I was able to start in fairly quickly. The first surprise for the novice is that ‘green’ wood arrives in log form and wrapped in a novel packaging called bark. The thought of splitting a 10 inch diameter log may be intimidating. Get a wedge and drive it into the end of the log with a sledge hammer, ‘Simples’. If you have a friendly assistant who is willing to sacrifice their fingers then the task is easier as splitting a log is not quite the same thing as falling off one. Selecting a suitable fissure in the end grain, the wedge is held with one hand whilst the 10 pound sledge is brought down slowly on the wedge. Once the wedge had ‘bitten’ then you can hold the hammer with both hands and apply more force. The assistant’s body language will demonstrate their confidence in your abilities by either holding the wedge / log combination with; fully outstretched arms and body well away from impact zone and head turned away with grimace, or closely held wedge and smiling visage. What seems an impossible task ends in the blink of an eye as most logs split easily along the grain. You are now left with two large pieces.

Parring down the cleft wood

Phase two. The paring down of the split pieces into something resembling a cylinder so that effort of bodging is reduced. This is where the ‘shave horse’ comes into its own. The original hands-free device, it allows the selected piece of log to be held firmly virtue of clamping by your legs as you fashion the wood using a ‘draw knife’. If you see a craftsman on a shave horse you’ll understand more easily how it works and why most men and some ladies immediately want one. The split log quickly becomes roughly cylindrical and ready for ‘bodging’.

Like your mothers old sewing machine, the pole lathe operates on a treadle principle with the spring return provided by a long sapling pole, hence the term ‘pole lathing’. Conquering the treadle is a matter of seconds and allows the operator to concentrate on placement of the chisel against the newly carved and now rotating wooden block. Because it’s not perfectly round the log is initially hard to fashion but with determination the wood soon resembles a chair leg. I forgot to mention, the challenge set to the group this occasion was to make a stool, three or four or even one legged.

The have a go sessions

By the end of the day I had three reasonable looking legs and a huge amount of pride in them. But to leave the piece there is to short change the group’s efforts because not only were we challenged to make a stool, we did it in full view of the public. A small pole lathe was also available for a visitor ‘have a go’ opportunity. Paul and Jim did sterling work throughout the day, helping small children and larger adults, sample the delights of making something with their own hands. As they instructed and assisted visitors in fairly simple operations on a prepared sample, their patience was amply rewarded by the huge grins of a lot of little visitors.