Reflections of a mower by Shane O’Reilly

Following on from my initiation into the art of scything, or mowing as the old hands call it, I attended a couple of evening practise sessions on Wimpole’s Victoria Avenue. Working with other more practised hands, who were happy to pass on tips and techniques, is a great way to hone ones skills. It’s always difficult to know whether it’s your method, the blade sharpness or the angle of the blade that is causing you not to progress as well as you should. With The broad avenue is a central lane bordered with lush grass, plantain and clover along the track sides, which changes to taller flowers and grasses as it nears the hedge and tree-lined boundary. With Jim and Simon keeping us in line, we made inroads into the verdant verges of the Avenue. Cutting so much would be tough on those that had to collect and spread the cut grass and flower heads the next day but enjoyable for us. This mixture of grass and wild flowers made for hard mowing in the evening as the stems had dried considerably in the heat of the day. Sweat appeared on even the most seasoned brow.

Towards the hedge line were huge swathes of Meadowsweet, a gently scented white flower that stood chest high with hard formidable woody stems. Resolving to try cutting this I launched into it and was surprised as the stems were cut cleanly by the blade and they fell like trees to a chainsaw. As the stems weren’t as densely growing as the grass and clover mix, they were not as strenuous to cut. Once again I marvelled at how efficient a man and scythe can be at cutting fairly difficult and tall growth and I’m not at all proficient.

This episode was called to mind a few days later as Jim and I stood surveying Simon’s tree nursery. Ever cost conscious and looking to eke out his budget, Simon had pressed his volunteers to gather seeds last autumn from every type of tree on the estate. His view is that the seeds of trees that are there, especially the larger ones, are more likely to succeed on similar ground. So we gathered acorns, horse chestnuts, hornbeam, spindle, elm, beech nuts, hawthorn berries, in fact any seed that was around and lying below a large tree. Buckets full of them. These seeds were sown on the allotment area and became the tree nursery. Alongside this nursery, Jim and Simon had pushed lines of willow stems into the ground to create an osier bed. Now one year on we were surveying the same area. It was awash with waist-high weeds, thistle, dock, and much I didn’t recognise but one that I did was the aforementioned Meadowsweet. Neither sapling nor willow was to be seen but closer investigation showed the hardy youngsters were there below the overwhelming sea of competitors. 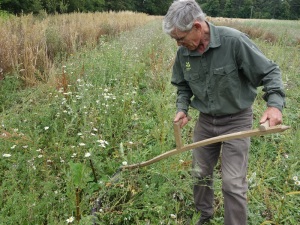 ‘We’ll cut those back’ said Jim and beads of anticipatory sweat broke out on my brow. Not only due to the work load but also the fear of cutting through the stem of the recently emerged youngsters so lovingly planted by the boss. Jim brought out the scythe snaths and two 0.65m blades, a little long for the job but we didn’t have ditching blades. Scythes assembled, we got under way. In the best tradition of general ship, I allowed Jim to start and followed on after he had established a small lead. He had adopted a shorter stroke, the sweep of which just stopped short of the first row of willow and he worked methodically down this row. Taking my lead from him I was able to stand in this cleared furrow and, working over the first tier of willow, start to clear the second line. As the willow was not as high as the weed and the planting lines weren’t precise, it was necessary to proceed with caution. Caution was also called for with the backstroke of my scythe sweep as an extended sweep would decapitate the first tier willow that Jim had so skilfully exposed. I adopted the same short stroke Jim was using.

All my messing about meant that Jim was now returning to start the second tier, and diving in higher up, again worked down the line leaning over and cutting against the second line of willow canes. I continued cutting but was occasionally tempted by an especially large weed further in and so meandered a little. By now Jim was returning down the line, though this time standing on his second cut and working on the reverse side of the first row. Now I saw the method in his madness? By working from the cut row he didn’t trample the weed and thereby make them harder to cut. Also by working in a straight line he had an evenness of action that created an efficiency of effort. The first line of willow began to emerge from the forest leaving only the small amount of weeds between the individual canes stems to deal with. By contrast, I had meandered in a circular motion freeing each individual cane and whilst not useless, it was not as efficient as the straight line method. Did this reflect the way our minds worked? I consoled myself by tidying up the few weeds Jim had left behind. After about half an hour we had an osier bed again. The bright green lines of vigorous fresh growth on the planted canes willow stood exposed. A few were a little shorter than minutes ago but I blame that on inaccurate planting and not overzealous mowing. 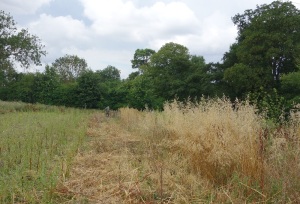 Where those trees then?

Our eyes now turned to the tree nursery. This looked to be more difficult as the seeds had been sown in furrows and close together. The resulting saplings were not as tall as the willows and well covered by the densely crowding weeds. With a new technique, ‘air scything’, Jim set off cutting in traditional sweeps but about four inches off the ground. This had the effect of removing the leafy part of the weed and leaving only the stems. The young trees now had direct access to light. We were delighted when our first pass revealed rows of chestnuts and oaks. They had a considerable way to go before they achieved the size of their parents out in the parkland but they had a better chance of survival now. We had taken about an hour to clear the whole nursery area and pathways around it. It was clear to me with inventive handling what a useful and effective tool the scythe was.