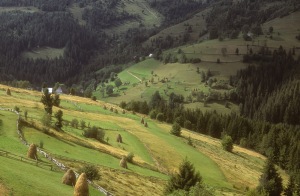 A mosaic of habitats

Quite some years back I went to Romania and was amazed at the mosaic of grassland habitats. Why were there so many cutting regimes? Well, when you use the scythe to mow a meadow you can only do about an acre a day and then you have to dry the mown meadow to produce hay- it takes a lot of hard work and time. This scene would have been commonplace in England up until the Victorian era. After that, industrialisation  meant tractors became king, the mosaic of grassland habitat disappeared along with the wildlife and biodiversity. Nowadays people seem to be obsessed with mown grassland (topped to keep it uniform and green), not what would have been seen when the deer park was full of fallow deer at Wimpole. 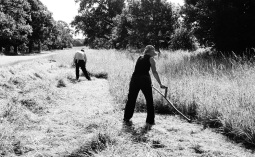 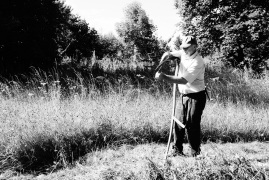 Green haying is somewhat similar  to the old way of mowing –  a small area is mown, then the cut grass and flowers are moved to another meadow, then back to mowing the next small area with a scythe. This creates many different grassland habitats and allows the wildlife to move to areas of flowers where they can refuel themselves or eat their required herbage. The common blue butterfly caterpillar,for example, feeds on bird’s-foot trefoil. Duke of Burgundy like cowslips. 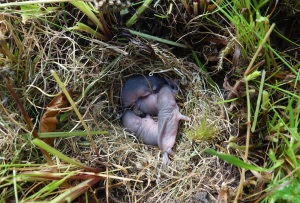 Some of the wildlife can’t escape ( unfortunately these short-tailed voles will probably have ended up in the belly of some crows), but in general the scythe allows the wildlife to escape, unlike the ultra fast massive modern drum mowers on huge tractors. Modern economics dictates the use of such large machines as without them food would be horrendously expensive. 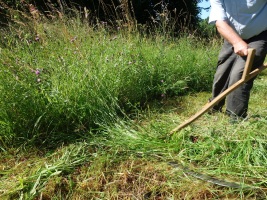 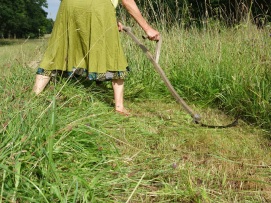 The Monday evening session was well attended and they cut quite a bit of the meadow, enough to keep us busy on Tuesday. 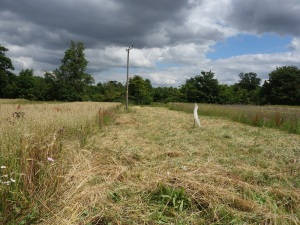 Nobody in on Tuesday but the forecast for the week was for fine weather- time to mow the Chevalier barley with a scythe. It didn’t take very long and was soon mown into windrows and left to dry. This was the old way of harvesting barley- hardly ever made into sheaves, just mown to dry. When it dries we will put it into a cock. 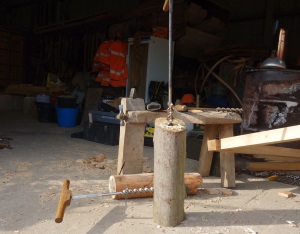 What on earth was I up to?

Alistair, who comes mowing on Monday evenings, knows quite a bit about wood fuel, charcoal and rocket stoves. I had an interesting conversation with him and a web link led me to the ‘log rocket’. Some of you may have heard of the Swedish log- a log cut a few times longitudinally with a chainsaw- it works as a sort of fire lantern but can be difficult to get going. 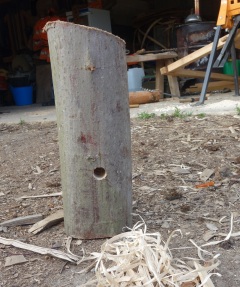 Hole in the top, hole in the side and some tinder 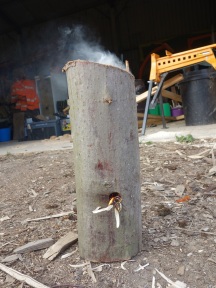 Light the tinder and shove into side hole

However, the ‘rocket log’ is based on a rocket stove design- you bore a hole longitudinally down the log then bore into the side to connect the two holes. A bit of fire tinder is put in the bottom hole and the hole going upwards acts as a chimney ( where there’s smoke there’s fire!). 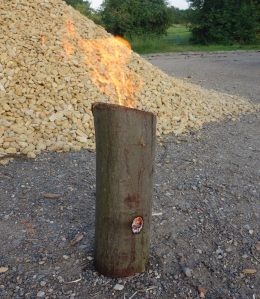 Wasn’t long before the log was raging- the rocket stove design super heats the gases which burst into flames. These logs can last 3-4 hours easily and for my second attempt I bored the holes with a chainsaw- even better results. (Seems 3-4 inch holes are best.) 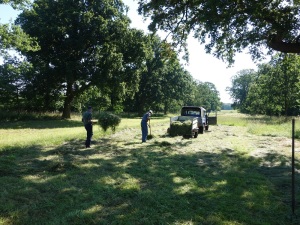 Back to green haying

Back to green haying on Wednesday, didn’t take long to get this lot moved. 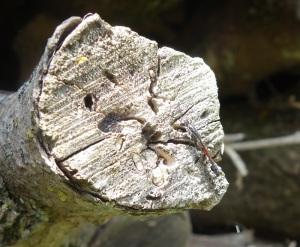 Ichneumon wasp on log pile in the South Avenue

Down in the South Avenue, when spreading the grass, we had a quick look at the log heap made from the wood collected from a section of hedge we had laid a few years back. This is a good area to find some heat loving solitary wasps -mostly the small black species, of which there are quite a few, but there were some ichneumon wasps too. These have long ovipositors that bore into the wood to lay eggs near beetle larvae- it’s amazing how they know where the larvae are. 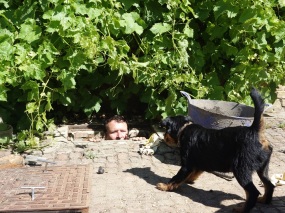 Bryan up to his neck in it 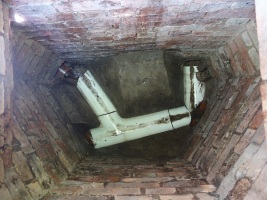 All clean … now the water can get away

Long time since these drains have been cleaned! Bryan and Andy, who do all the maintenance on the estate, spent a good part of the week cleaning all the drains around the Hall and Stable Block- they were absolutely full of muck ( probably the reason for the flooding). Some of the drains were exceedingly deep! 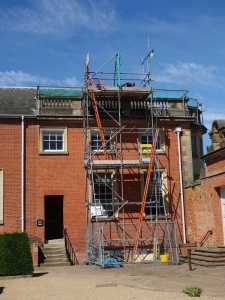 Some re-leading on the roof of the Hall

Also, the contractors were repairing the lead roof on the east side of the Hall ( another good job as this will stop rainwater seeping through the roof); the west side will need doing too! 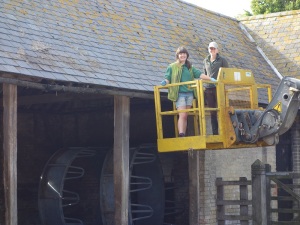 Cleaning the gutters at the Farm

After the big thunder storms (and the flooding they caused) the farm staff were also busy cleaning out the gutters. This is a very important job as it will stop the rainwater pouring over the gutters and onto the woodwork. That was one of the reasons why the old buildings at Cobbs Wood had suffered so badly and why quite a lot of the sole plates and studding had rotted away. A small amount of time undertaking routine maintenance will save a fortune in the long run- well done the farm staff! 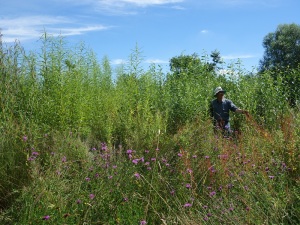 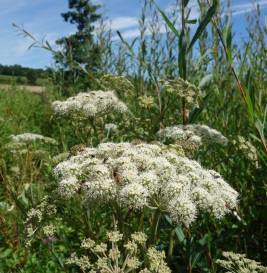 Had a look at the willow coppice- it certainly has grown and, at this rate, some of it may attain a height of twelve feet in one year. The angelica has started to flower too and the insects absolutely love it.

Some species are grown as flavouring agents or for their medical properties. The most notable of these is garden angelica (A. archangelica), which is commonly known simply as angelica. Natives of Lapland use the fleshy roots as food and the stalks as medicine. Crystallized strips of young angelica stems and midribs are green in colour and are sold as decorative and flavoursome cake decoration material, but may also be enjoyed on their own. The roots and seeds are sometimes used to flavour gin. Its presence accounts for the distinct flavour of many liqueurs, such as Chartreuse.

Among the Sami people of Lapland, the plant is used to make a traditional musical instrument – the fadno.

A. sylvestris and some other species are eaten by the larvae of some Lepidoptera species, including bordered pug, grey pug, lime-speck pug and the V-pug. 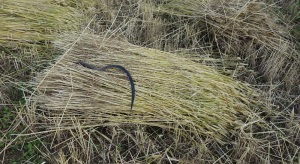 The sickle and sheaf

It’s that time of the year when the wheat has turned- it’s ready to harvest with a sickle. Still a little green, but that’s the best time as it cuts easily and the grains don’t fall out. 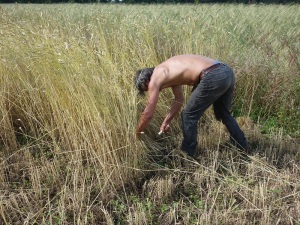 Reaping with a sickle 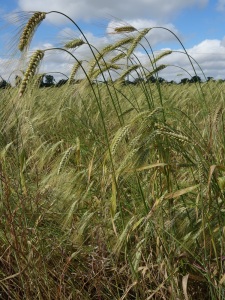 Revet wheat, not quite ready 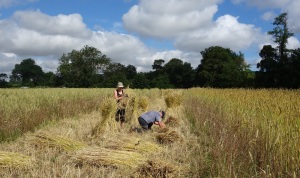 First to be harvested – the Childenham White wheat

Enough wheat is cut to make a sheaf, then this is tied and placed with another 6-8 sheaves so that they stand upright which allows them to dry. It’s hard work and would have been a long day in boiling hot weather. 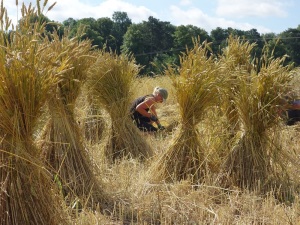 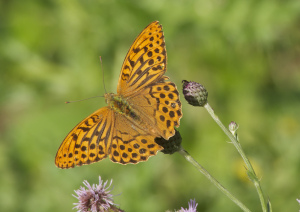 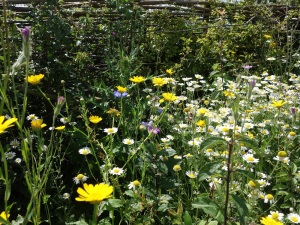 Arable flowers alongside our laid hedge 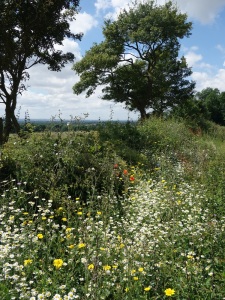 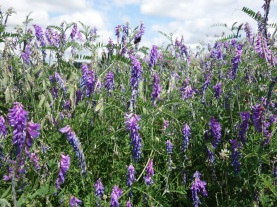 Tufted vetch on one of the beetle banks 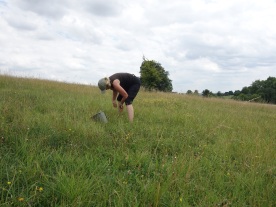 Amazing how the wildlife has flourished this year- flowers everywhere of all sorts and colours. We collected buckets full of cowslip seed which was later spread throughout the South Avenue. 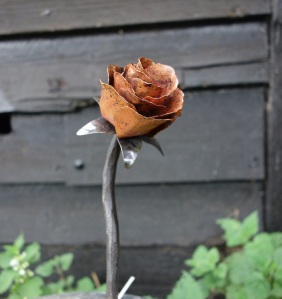 Made a few copper roses- took two attempts to make this one ( the best part of a day, maybe a bit longer) but all from the scrap bin. It’s quite difficult to forge iron and copper and I tried to rivet the copper rose but melted the first one.  One for Jess and one for Siula who had her 21st birthday…