Mr O’Reilly’s little tale of one man went to mow a meadow.

The would be mower

‘What have you been doing this week?’ My hairdresser asked as a way of getting me talking.

I thought for a moment and told her ‘I learnt to scythe.’

‘As you do’ she said, the stock answer to an unusual statement these days.

But it was with great satisfaction that I said those words. What had started out as mere interest in the art of cutting grass with a large blade had become a source of great pride.

I had, with great trepidation, undertaken the British Scythe Associations introductory course to the art of mowing due mainly to peer pressure. Who in their right mind would want to stand in an open field in the scorching sun and thrash away at long grass with a razor-sharp blade on the end of a pole? As a lifelong idler, I could think of nothing worse.

Can Shane and Jayne mow this?

So it was without enthusiasm that I joined the others, four ladies and eight men, on Saturday in an open marquee in the front park of Wimpole Hall. The marquee performed as classroom and adjustment area for all mowers preparing for the competition on the next day. Richard our instructor laid out the programme; Introduction, History, Safety, Technical, Motion, and last of all Practice. The day seemed full of potential for boredom coupled with physical exertion and even injury.

As he went through the scythe components and talked of the history of the tool and why today the Austrian scythe is preferred to the English, my interest was piqued and I began to pay attention. (English scythes are made to measure; Austrian can be adjusted and are a good deal lighter). We moved effortlessly through his programme and by 10.30 each of us was issued with the components of our scythe. How we managed to assemble them without losing fingers or cuts to someone’s head I shall never know as blades were flying around in all directions in the battle to prepare to ‘mow’. So it was that we moved outside to the open air to practice the scything motion.

Without scythes we were shown how to lower our centre of gravity and rotate our bodies whilst extending and lowering our legs alternately in a ‘Tai Chi’ like motion.
‘Think of sitting on a bar stool,’ Richard said and obligingly I dreamt of a cool beer instantly. ‘Swing your arms around your body and keep the “imaginary” blade parallel to the ground’ he coaxed. So there we were rising and lowering and swinging our bodies and arms like an open air yoga class with hundreds of visitors looking on.

‘Now pick up your scythes.’

It’s amazing how suddenly conscious we all were of the proximity of our neighbours. Beads of sweat appeared on my brow as I sensed the swish of scythes being swung around with unpractised ease. Did I mention how sharp these things are and that in the short practice grass there is little resistance to the blade. We practised the scything motion, now with scythes. Twisting back to the right and pulling the blade around the body to the left and at the same time shifting the body weight from right to left leg. If that wasn’t enough we also had to inch forward as we finished the cut. We spent some minutes trying to meld these actions into a smooth flowing movement. Richard split us into groups and we moved to the long grass set aside for practice. 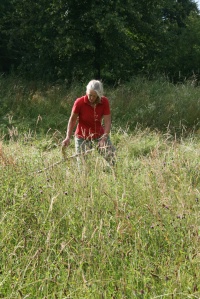 Jayne tackling the long grass in front of the hall

‘Look at the grass and assess the way it’s laying, you need to cut into the grass from the side that lays away from you,’ Richard advised. This seemed counter-intuitive to me but we obeyed. The men in the group started hacking away at the grass in front of them and seemingly made progress but it was the weaker sex that caught on quicker. It wasn’t brute strength but technique that proved most efficient and they soon mowed with ease. However even they would occasionally curse. Tilting the blade up caused it to ride over rather than cut the grass, tilt down and the blade dug in and came to a shoulder jarring stop.

‘Focus’ I told myself, ‘Twist the body back to the right and pull the blade round.’ Done correctly, the blade traced an arc ahead of your inching body and left an even stubble of cut grass stems and a pile of potential hay to the left. Did I mention the anthills, there seemed to be an unbelievable number of them. If nothing else they blunted the blade but usually caused enough resistance to halt the swing. Little by little there was a sense of it all coming together as around the practice area heads were bent in concentration. Grass was being mowed if not with the highest quality at least with some proficiency. We were also beginning to sense the effect of the lay of the grass. Our actions were becoming a flow rather than a series of hacking jerks and our legs, arms and torso’s were easing into the motion. Then almost as one we all began to slow, we were hitting the sharpening wall. The realisation that even blades of grass can dull a razor edged carbon steel blade.

Jayne learning to peen on a bit of mild steel

We were instructed how to hold a 0.75 metre blade and run a stone along its edge without taking the skin off a finger. The whole process seemed to be an insurer’s nightmare. Then back to the mowing. Aaaahhhh that’s better, the blade was cutting again. Now we were all cutting and sharpening, and then cutting more. Finally lunch break was called and we all headed for the cool of the marquee. On the restart, we were initiated into the black art of peening. The method of squeezing the over sharpened  blade edge back to its original condition by controlled hammer blows. As we started our practice (on sample pieces and not actual blades) the heavens opened. My aching back would now have the added burden of sodden stems to cut and knew I would regret this tomorrow. Most understood the need and method of peening without actually mastering the technique. That was for another day, as today was for scything. As the ran eased, we went back out to practise mowing.

Sometimes it went well, ‘Yay, I’ve got it taped’ and then the blade would lift. There’s nothing worse than having a small clump of uncut grass left at the end of the sweep that has now been bent over in the wrong direction. You have to reposition and deal with it separately. By the end of the day most of us felt competent and had actually enjoyed the experience and returned home with the smug glow of considering ourselves scythers.

The following day was the scything competition day when the professionals tested their skills against each other on various size plots for time and quality. (5m x 5m, 10m x 10m, 1/8 acre and 1/4 acre). Having helped mark out these plots earlier in the week, I was daunted by the prospect of even tackling the smaller plots never mind 1/4 acre. Can you imagine how much grass there is in a 1/4 acre plot? However I did help with the timing and had the opportunity to follow behind the competitors as they took on these challenges. Their skills and artistry were soon evident as, almost without thinking, they mowed through the plots. The action was mesmeric. The sound was a scintillating hisssssss as grass stem was met by edge of steel. As I followed them my own muscles began to tune in with the action in Zen like mimicry. As they swung back and forward I could feel my own body rhythm struggling to be in sync. Now I could look at the grass and see why a certain direction of cutting was chosen. Now I could understand why they stopped at times to sharpen. Now I understood why they spent hours bent over their blades peening in preparation. A fluid body motion, hypnotising sound, numbing exertion as body strove to stay as one with the scythe and the blade cut. A combination of Tai Chi, Kendo and golf swing. Mind focused to the exclusion of all else. Ashamed now of my own fears of competing, I determined to try a plot of my own.

So it was that with a couple of other like-minded debutants, I went out the following day to mow one of the remaining plots. The 5m x 5m plot of metre high grass swaying in the wind looked daunting but we selected our plots and set to. Within minutes I had demolished mine. Not a great time by yesterday’s competition standards. Anthills and poor technique notwithstanding, I had done reasonable job. On to the next, and the next and the next. I was addicted. Three of us now set about a 1/8 plot, with staggered starts to avoid clashes. Now we were working as a team, cutting, sharpening, and moving forward. Looking to the others, assessing their work, feeling their proximity, gauging when to slow to avoid a clash. It took just over an hour but Everest was conquered.

Before I started I had high expectations; of huge quantities of sweat, of blood being shed, of a back that would not forgive me the following day, even of boredom of the minutiae of scything. As it turned out I did sweat some, I did lose a little blood but my back didn’t ache and surprise surprise, I wasn’t bored. I now count myself among the lower echelons of scythers and am proud to say it. I ‘mastered’ the scythe.

1 Response to Mr O’Reilly’s little tale of one man went to mow a meadow.