The stable block where we hold the scythe festival

Only a few days ’til the scything festival in front of the stable block and the grass was as thick as I have ever seen it (so the mowing times could be slower).

More preparation before the weekend 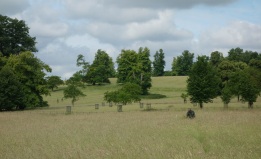 By Thursday we still had quite a bit to do: finish mowing the paths between the big marathon plots and the smaller sprinting plots – hard work in the heat of the day. 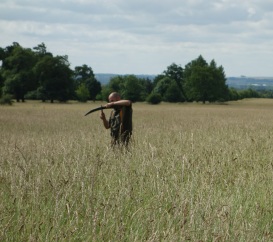 Jayne & Neil raking out the paths

Paul was doing exceedingly well mowing the strips that separated the marathon plots (east to west) and then Neil & Jayne raked them out to make sure the edges of each plot were square and straight. 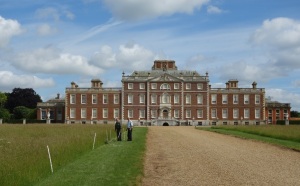 Hot work before the weekend

Meanwhile, Shane and Jim were doing the same with the 5 X 5 & 10 X 10 plots- quite a tricky job with the scythes. Last year we used the gardeners’ finger bar mower but, alas, this year it was broken (still, we were getting some practice in, so there is always a silver lining to every cloud, so to speak). Oh, I forgot to add, the strimmer/scythe race and the team racing plots had to be done too.

Plenty of pyramid orchids in front of the Hall

While mowing the 10 X 10 plots Jim came across a rather lovely pyramidal orchid. In fact, there had been about seven of these orchids dotted around the front lawn ( this one was left and hopefully will manage to survive the weekend… wonder if it will?).

Mowing an 1/8 early on Friday morning

Friday morning arrived and I, for my part, woke up at 5.30am- time to go mowing a quarter of an acre and, some time later, so did Chris Riley. I had nearly finished when Jim and Paul turned up looking a bit fierce… blast! I had forgotten to open the gate for them so they had to have a later start, sorry lads! 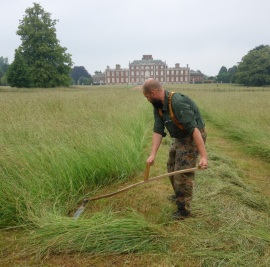 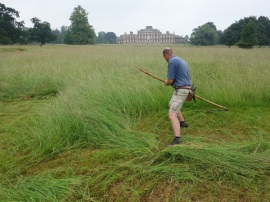 One advantage of mowing early in the morning is that the grass has plenty of dew on it which means the mowing is always easier. By midday the grass gets drier and harder to cut and it’s hot work too. Next year we may have a super marathon ( an acre)- that’ll take all day and is a man’s day of work. Having mowed an acre some years back you really do appreciate what the men of old did- they would mow an acre every day except Sunday (and could eat a horse); not many of that strength and character these days unfortunately. Got to think of the rules for this event, maybe we will allow two blades of different sizes to be used so that, as you tire during the day, you can swap and use a smaller blade.

Final touches before the weekend

One reason to cut the marathon plots early was so that we could put that behind us and enjoy the weekend, however there were some finishing touches to do- bring the wood down to the event area, put up some more marquees, bring the fire grate down and gather all the working tools: scythes, axes, green wood working tools etc etc etc… and not forgetting the blacksmith forge. All ready for the weekend 🙂 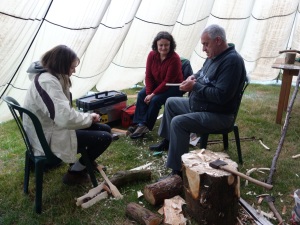 Saturday got off to a very good start- a lovely, fresh and sunny morning. The scythe mowing course was filling up and I had three people on the spoon carving course. Clare from the estate office was one of the participants which was really nice- hopefully she’ll be producing plenty of spoons shortly. When learning this craft the first item to carve is a spatula as this is relatively simple; once they master this they go on to make at least one spoon, if not more. 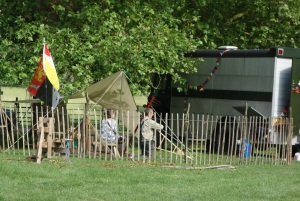 By 10.00am the event site in front of the stable block was filling up with bodgers, wool merchants, willow workers, furniture makers, hurdle makers and a charcoal burner, to name but a few. The forestry team had set up their woodland display and ‘have a go’ section which included Rosie’s rope/twine making workshop. She was using nettles, willow bark and elm bark and made bracelets for the children. There was even a Norfolk contingent with flag an’ all.

Everything was looking good… that was until the forecasted rain decided to turn up a little bit earlier than expected. That put a dampener on the proceedings and, luckily for me, I had already sheared three of the six Norfolk Horn sheep. However, as the rain eased, most went out to bodge, burn, turn, whittle, chop and try some of the ‘have a go’ events.

As some took shelter others were hard at work. James Hookway was looking after his retort kiln- it produces charcoal by cooking the wood (unlike Wimpole’s ring kilns which burn the wood). A ring kiln needs six tons of wood to make one ton of charcoal whereas the retort only needs four tons of wood to make a ton of charcoal. The reason for this is that a ring kiln lets the smoke go out of the chimneys into the air while the retort re-burns the exhaust smoke and so does not need to burn so much wood in order to produce charcoal.

With both sorts of kiln you need to have well seasoned wood at about 15% moisture content (that’s because it takes a lot of energy to drive the water out of the wood in the form of steam). Even the retort can’t re-burn smoke full of steam. You know it has steam in it as it is a lot whiter, when the water has been driven off the smoke gets a dirty grey colour. With the retort, when the smoke goes this colour, it is then redirected back into the burner (as seen in the ‘smoking’ photograph) to burn and produce more heat which then cooks the wood more and produces more smoke- pretty neat eh?! When the wood is cooked the smoke stops coming out so you know when the process has finished.

During the day a number of mowers went out to scythe the marathon plots- best to do these as soon as possible so that you are fresh for the next day’s competitions.

As I was teaching spoon carving (with a bit of sheep shearing at lunch time) I did not get much chance to take many photos, but I did get a few, and one of these was Mark Allery making an English scythe snath- was that for tomorrow? Don’t think it will be ready Mark!!!!! 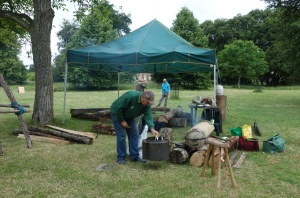 The sheep BBQ with homemade cider

By the end of the day the weather had cleared up somewhat and, after the public had gone, we stoked the fires to cook some shoulders of lamb (from my sheep) and there was plenty of homemade cider to be had. I have learnt that if it is a bit too dry you can add some pasturised apple juice to sweeten it ( not a bad idea actually, as one cider can then suit all tastes).

‘Twas getting a bit dark and cold

After the BBQ we put logs onto the fire to keep warm as the night-time temperature had dropped and mist was rolling in; a tilley lamp purred in the background illuminating the darkness … after a little while some of us were getting a little merry 😉